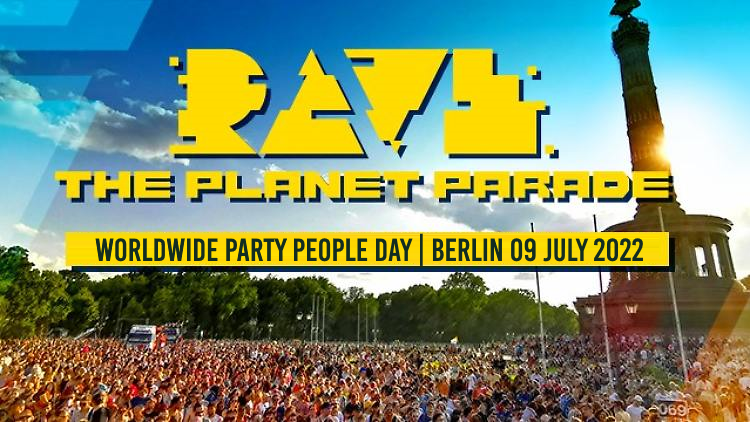 ONE YEAR RAVE THE PLANET

Admittedly, the plan to bring the Love Parade back to Berlin excited us from the start. The legendary techno parade with 2.5 million dancing people is something we will never forget. The spirit and the unity is something that has never been reached again. The first year now passed by – and we give you an update.

In total, a new parade in the heart of Berlin, with the original Loveparade Spirit of the 90’s- and a new and unique financial concept – called ‘Fundraving‘ to finance this and other charitable projects.

For this purpose, a model of the Straße of June 17th. was erected in the heart of Berlin, opposite the Bundesrat. This was the last stretch of the Love Parade in Berlin. The initially empty model was to be gradually filled with mini-raver figures. For every donation from 5,00 €, supporters could choose one of about 30 different figurines, online and also directly on site, which was then placed on the model symbolically for the donation made.

So all contributors become part of this project – amazing.

Challenging COVID19 Lockdowns and much more

In March 2020 the virus had the whole world now under its control. And with this a never seen global crisis, all lives got changed dramatically. Public events, meetings, and happenings were mostly canceled or just moved to online platforms. Social distancing was the behavior in all heads and minds.

For the ‘Rave the Planet’ team this factor could never have been predicted. Of course, collecting enough money to bring back the Loveparade to Berlin, was already a huge task. But this virus just changed the rules.

The drawn attention around the parade was suddenly replaced by life under lockdown. Vaccines, death rates and demonstrations here the points that received the full attention day by day and moved their attention away from the parade.

But the Team around Dr. Motte never gave up – and started to invent new ideas and formats. The originally initiated ‘Instant Raves’ at a famous local club in Berlin, got transferred online. On March 14th. the team already managed it, to broadcast online.

The list of DJ’s who participated is already pretty long, and fosters the view that so many want the Parade be back to Berlin.

With the persistence of the virus and the ongoing uncertainty if large-scale events can be conducted – the organizers announced that the parade has to be moved by one year to 2022. With its Birthday they now announced, that the new date is set to July 9th. 2022

In the mean, the official counter quotes that EUR 391.962 have been collected so far and the goal of EUR 1.500.000 is reached by 26,13%. Therefore, we request you all to support this project and vision, to celebrate together in 2022. Like back in the good old days. Music is the Key

Read more about the Parade