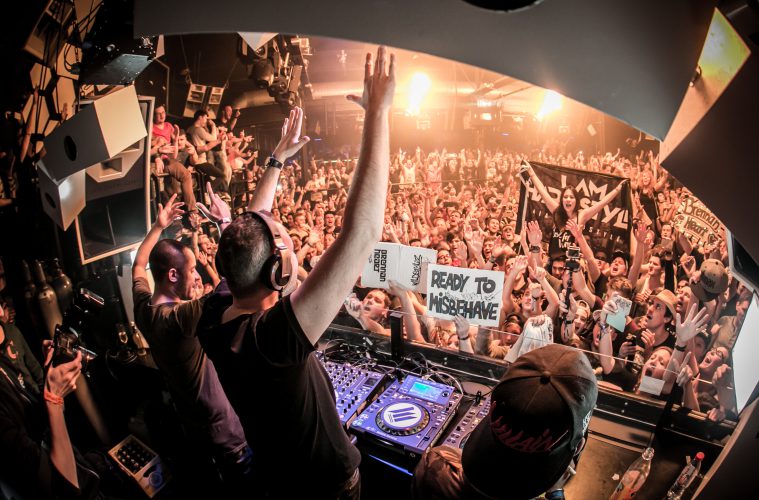 Spreading hardstyle across Germany – This is Musical Madness!

One of the leading event organizers in Germany, when it comes to hard dance music. With various concepts, tours, and parties across Germany, throughout the whole year, the guys from Musical Madness are celebrating huge success! We highly recommend to visit one of their events – quality dance events is not only their slogan, it’s their philosophy. Today we have them here for a short interview! Read all about their events, upcoming plans, their history with Musical Madness and a critical view on the scene here in Germany!

Hey guys, we are happy to have you – one of the leading Hardstyle promoters in Germany – here today! Can you quickly introduce yourselves for our readers?
The basic Madness team just consists of us two: Benjamin – who is responsible for all the planning, organization work, logistics and contracts – and Daniel – the creative part, graphic designer and marketing guru. We’re both music nerds so in terms of bookings we decide everything together. Besides that, we of course also have a lot of people who help us with many different things. Shout out to you guys.

So, can you give a short overview of which events you held this year?
We had a pretty good start into 2016 with two big Gunz For Hire tour stops and a few club shows with acts like Atmozfears, Brennan Heart, Code Black (just to name a few). In April – right before the summer – we went one step further and started the XXL concept which turned out to be a huge success. We also started the ‘This Is Hardstyle’ hosting series in which our residents are deeply involved.

Let’s travel back in time! When did you start with events? What was your first event ever, you organized?
The first Musical Madness event has been held in 2006 (10 years ago) and started as a two-floor concept with Trance/Hardtrance on the mainstage and Hardstyle on the side-floor. Daniel hasn’t been involved in the first few events so the idea came from Benjamin. After that we both combined forces and have built it up to what it is today

10 years Musical Madness, 10 years of quality dance events. Sounds like alot of work. Which milestones did you achieve? Did you ever experience a bad time with Musical Madness?
Within 10 years we went from a small underground club (Four Runners Club, Ludwigsburg) to a bigger location (Zapata, Stuttgart which has been shut down after a few months unfortunately) to a different city (halle02, Heidelberg) and after that straight to one of Germanys top clubs (Bootshaus, Cologne). That already was a pretty adventurous journey. Back then it’s already been a huge success but it felt like our real journey just started. We began touring with acts like Headhunterz, Noisecontrollers and Gunz For Hire and brought the Hardstyle sounds to many different cities. The community grew, the events went bigger and meanwhile we’re heading straight towards the 20.000 likes on Facebook. Of course we also had difficult times but we went through it together, have grown together as a team and earned so much experience in those harder times.

Can you point out the problems and struggles smaller event organizer have to fight with? Especially here in Germany?
There are many problems you can run into when you don’t have any experience but that’s something pretty normal when starting a business. The biggest problem we see with new promoters is that they don’t have a lot of staying power and want too much in a really short period of time. You know, it took us 10 years to get there. You just have to be passionate about what you’re doing and you shouldn’t give up if things don’t work out the way you want to because that can and will happen. Just try to avoid making the same mistakes twice 🙂

So, normally, if you plan a new event. How do you start? Can you maybe give a short summary of a creation process of an event?
Meanwhile we have a few different concepts to work with – each one with a different look & feel – which makes it a lot easier for us. Normally, we decide which act fits to the location and build everything around that (from artwork over marketig to support acts).

With Musical Madness XXL you nailed it. You had great success with the first edition and will take people to the second edition on 8th of October! With a third area you also pay attention to the rougher sounds. Why does this concept works so well for you? Why do you choose the Bootshaus as ultimate party location?
For the XXL event series we decided to go a different way. We had the feeling that, with the Rawstyle hype and many oldschool fans who can’t really dig the new sounds at all, the scene was splitting more and more.

So, with this event we want to emphasize that everything from Euphoric over Raw to Oldschool is HARDSTYLE and therefor try to unite the whole Hardstyle community in one event. Another key to success is that we don’t just book a lot of big names but also make sure to have a good build-up of the night. Each act has a different role in the concept, just like every actor is playing a different role in a musical.

Having Bootshaus as the location was not really an emotional but a rather logic decision. We love the club and the crowd there but besides that with the three areas and many big cities around the venue is just perfect for this kind of event. We’d love to further spread the concept in Germany but we don’t have any other location that fits so perfect and of course we also want to keep the concept a little special for now.

Regarding your third, rough area, what do you think of the future of the hard dance scene? Do event organizers have to change the way of thinking? Follow the new trend?
Not at all. We discussed this particular case a lot within the team but we never really jumped on the Rawstyle hype train. We still only support the acts we personally like and the ones that fit our vision of what Hardstyle has to be. As a promoter you always have to be open-minded to proceed and grow but you shouldn’t focus too much on what’s trendy at the moment. Rather set your own trends whenever possible.

Do you think the current development is critical for the scene?
Not anymore. Within one year all the Rawstyle stuff went so big and we’ve had a hard time working out how to deal with that. Not because we don’t like Rawstyle but because many of the big artists had problems dealing with that. We’ve seen the Dutch scene struggling a lot with that but in Germany people are more open-minded and appreciate both, the raw and the euphoric sounds. As long as the people understand it’s all Hardstyle we’re good with that and can work with that.

So, after Musical Madness XXL 2, what is coming next? We heard of great and big news? Can you maybe reveal some future plans?
We’ve already set the date for round three and confirmed the first acts. But besides that we’re working on our biggest project so far which will be revealed within a few days after this interview. We can’t tell much more right now but this project will hopefully be a milestone for the whole Hardstyle scene in Germany and will have a huge impact.

Let’s ask something more personal! If you have to describe Hardstyle or the harder styles with 3 words, which would it be?
Energy – dedication – emotions. Simple as that.

Which newcomer should listeners and people around the world keep an eye on?
Besides acts like Atmozfears, Bass Modulators and Audiotricz who we think will grow to be the new ‘leaders’ of the scene within a short period of time we’re definitely keeping an eye on Devin Wild, Cyber and our very own talent Airtunes.

Which melody makes you smile the most? Today and in general.
At the moment: ‘Audiotricz – Inception’. Besides that we’re both huge fans of Eric Prydz his work and his album ‘Opus’ is something we both really love. Definitely a melodic masterpiece.

Do you want to tell your fans, visitors, friends or family some last things? Anything you ever wanted to say? Something coming from within?
We’re really really thankful for the appreciation people show for our work. We’re putting a lot of effort and passion into everything we’re doing and it’s a big honor to see people enjoying that actually. It feels like we grew to one big family and without each and everyone of you it wouldn’t work like it does at the moment. It would’ve never become so big. Thank you very much for the huge support we received throughout the years. We can’t wait to see you soon around.

Thanks for the great interview! We wish you all the best with all upcoming events! 🙂

For those who didn’t know yet, the second XXL party by Musical Madness takes place in two weeks! Click the picture below and secure your ticket now. We hope to see you all on the 8th of October in the Bootshaus, Köln <3