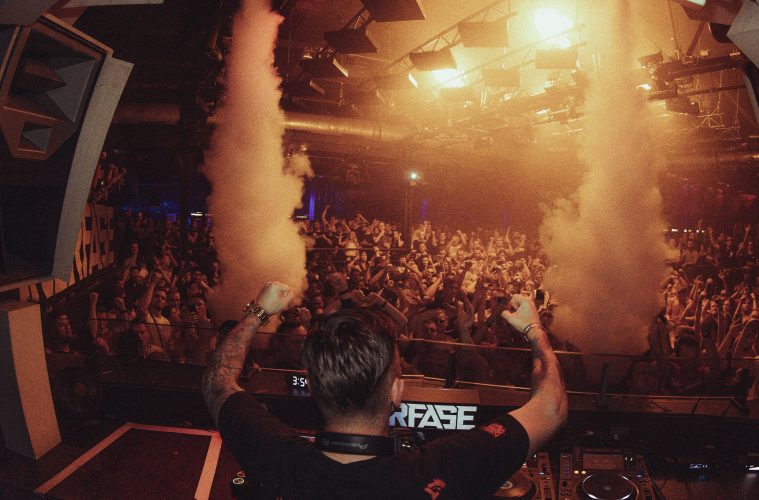 THIS WAS INURFASE MASSIVE: THE SHINING

Inurfase Massive: The Shining took place on September 9th at Bootshaus Club in Köln Germany. The sold-out edition consisted of three stages, a stacked line up, and incredible light displays. If Uptempo is your tempo, then this was the party for you.

Bootshaus, located in the outskirts of Köln has been the go-to place for electronic music since the early 90’s. Although the club is large in size and reputation, with well known artists performing there, the club gives off an underground vibe. Bootshaus is located on a shipyard in an industrial area and is quite off the beaten path.

This edition of Inurfase Massive was comprised of three rooms: Mainfloor, Blackbox, and Dreherei.

The stage of the main room was situated high above the crowd and decorated with large white cubes. As hardcore blasted through the speakers, laser beams shot at the white cubes illuminating the room. The dark smoky club instantly transformed into a sea of red hellfire.

The Blackbox was well… a legit black box. Equipped with even more laser beams and fog machines this room was essentially packed wall to wall from start to finish. If you’re an Uptempo die hard you were most likely here.

Finally, the smallest of the three areas Dreherei was home to the up-and-coming artists and frankly where I spent most of my evening. The sheer talent of the artists in this area blew me away. On top of all that the visuals behind the turntables synchronized with a light show on the ceiling was so mesmerizing you didn’t want to leave.

Although the party was 100% sold out and was packed it never felt so crowded that it was difficult to traverse the crowd. The vibes were impeccable, everyone in attendance was going hard to the music and genuinely enjoying themselves. The lines were not incredibly long for the bathrooms or the bars and there seemed to be adequate staff to accommodate the large crowd.

This event was so much more than just a loaded line up of exceptional Hardcore and Uptempo talent but an overall theatrical performance. The light shows were on point, the synchronization between the lasers, fog, and visuals really took this party to the next level.

Throughout the evening the sound was crisp and clear. In my interview with Trespassed following his set he mentioned that one of the best parts about this party was the sound quality. Sound quality is important for any music event but especially for Uptempo with piep kicks and skreetches, the sound really makes a difference.

The first DJ of the night for us was Irradiate. From the second we entered the energy was astonishing, it may have been early in the evening, but it certainly didn’t feel like that. A few times during this set I thought about wandering around and visiting other stages but Irradiate had me captivated under his Uptempo spell from start to finish. My favorite moment of the set was when he dropped Angerzam & MBK – Cerro. Everyone went from booty shaking to aggressively fist pumping, hakking, and kicking their legs high in the air.

Namara threw down a mix of nostalgic remixes coupled with Uptempo beats. My early 00’s teenage heart was full when she threw down some Avril Lavigne and Missy Elliot remixes. We all sang and screamed along to Tha Playah – My Misery (N-Vitral Remix) and DRS & Bass Instinct – After Life. Her set was so good that the party continued on into the girl’s bathroom (basically the fourth stage of the night).

Trespassed blew me away with not only his set but his ability to seamlessly and simultaneously perform, interact with the fans, and put on a genuine show. If you’ve never seen Trespassed play before this might sound strange but during his set fans will hold up their phones to give to him (and not just once, the entire set). He then takes the fan’s phone on stage and films himself and the crowd. The purpose of this is to make a special video that the fan can take home and remember the set by. At some moments during the night, he would have multiple phones in his hand and DJ, and be on the mic, and be interacting with the videographers and photographers. I mean talk about multitasking. His dedication to his fans really shined through. You could see he sincerely appreciated every single person in the crowd.

When he laid down Scarra & Vasto – Bassline Detonators everyone went insane and of course everyone’s favorite Sefa – Wat Zullen We Drinken got everyone singing (and mumbling) along.

Trespassed shared his thoughts with Hardstyle Mag on the party, his music, and how he manages to do it ALL during his sets in an exclusive Hardstyle Mag interview coming very soon!

Last up for the night was Barber. You would have never known it was 5:00 AM with the level of energy that the crowd conjured. It did not feel like the last set of the night or the end of party. People were going just as hard as the beginning of the night. That’s simply because of the level of talent that Barber has.

With tracks like Spitnoise & Barber – In the Jungle and my personal favorite Barber – Raggatempo, the set left everyone wanting more.

For any Uptempo fan this party was a no brainer, it was 200 plus BPM tracks from start to finish and I loved every second of it. The club is well laid out and spacious with a large outdoor area (and a food stand with French fries!).

The one piece of feedback I do have however is about getting into the venue. The line around 00:30 was extremely long wrapping around the club, into the parking lot down the street. This is understandable for a sold-out event of course; however better organization could expedite the entry process.

There was no clear indication of where to go and there was no designated line for the guest list. After the first extremely long line was a check point where security checked your ticket. Then you had to walk quite a distance to another long line. Then right by the entrance were fences and staff checking for tickets and security checking bags. For safety and logistical reasons using fences and signs to designate lines for guest list, artists, and regular tickets not just at the entrance but further down the road as well would help. It was for this reason that we missed the first part of the party.

Better organization of the traffic flow of guests coming into the club would prevent potential safety situations (like pushing and trampling) and would allow for people to enter faster (rather than having a large crowd trying to fit into one line).

I would 100% go back again and recommend Inurfase to anyone interested in attending a harder styles event. This was probably the best crowd that I’ve encountered at a party in a long time regarding how polite everyone was, the energy, and dedication.

Inurfase Massive: The Portal of Illusion will take place on December 16, 2022 at Bootshaus.