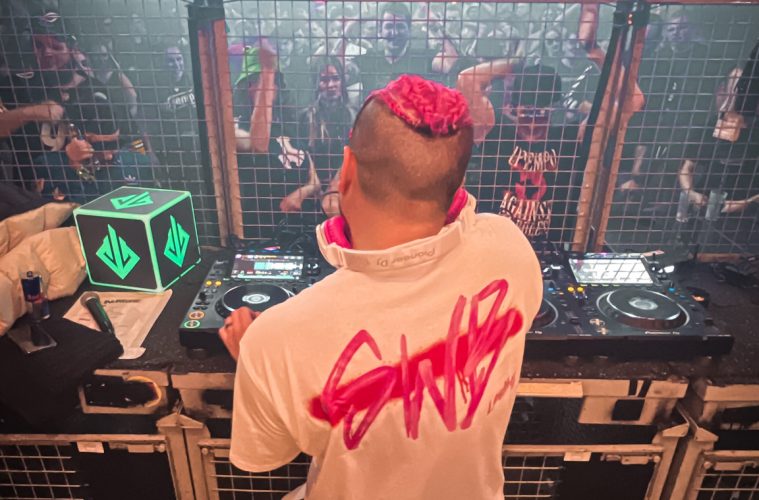 America’s first Frenchcore DJ and Producer Levenkhan presents a new and unique album Stalin Wears Balenciaga (SWB). The album is an eclectic blend of genres and styles. We sat down with Levenkhan to get the full scoop on all things SWB.

Firstly we gotta ask, how did you come up with the name for this album?

I simply followed the concept of ‘ Devil Wears Prada’ and flipped it into my own vision.. It’s not too deep. I think it’s a beautiful yet an uncomfortable contrast of art which is exactly what my album is; ART.

However I can’t take full credit since a Hip Hop artist by the name of ‘Westside Gunn’  already did something similar. He came out with a series called ‘Hitler Wears Hermes’. I thought that this shit was beyond dope and needed to incorporate this into my own vision of Electronic Music, Frenchcore/Uptempo, Punk.

Why did you decide to go in a different direction for this album?

I was simply tired of generic albums in our music scene (no disrespect) that are about the same tracks and templates from beginning to end, soulless and monotonous. Technically, I didn’t go into another direction as this album represents Levenkhan as a whole.

Furthermore, I simply put my past experiences of production into today’s modern day version of Levenkhan and SWB is the fruition of that. Besides that I created two canvases of the album cover which one will be a giveaway for a fan. Moreover, I have created and designed a promotional jacket of the album which we filmed in the city center of Amsterdam and in Times Square NYC. You can find the end result in my YouTube and Instagram, it came out dope. Producers are too scared nowadays to create music not only for the fans but for themselves and to experiment.

If the shoe fits…

The album contains an intro and an outro.  I heard some lyrics that may have been directed at someone? “I’m tired of these politics and these fucking dirty tricks seems like without piep kicks you aint making shit, but if you rip a whole kick then you lit, we all know you ghosted but too pussy to admit?

Perhaps it is rare to see within Hard Dance music, but that’s why I am here, to stand out and bring you a storyline behind this. My Intro song begins with a soothing voice of a good friend of mine “Michelle Diaz ” that talks about what the listener is about to immerse themselves into.  Then the entire sound changes into a very hard dark Hip Hop beat which I rap the words which you have just mentioned.

I can do this myself…

I have received many DMs of people asking me who I was talking about, and describing that rap verse as very truthful yet cold. My most sincere reply is if the shoe fits then so be it. If it makes you uncomfortable, then it’s directed at you. It‘s not deep, its simply what I observed over the course of time within the music industry and speak about it.

I heard your voice on most of the tracks! I know your roots are in Hip Hop but when did you learn to rap?

First of all I don’t consider myself a rapper, I’m a vocalist. I was always surrounded by Hip Hop, which subsequently rubbed on me at a young age. I would always mess around rapping with my friends from high school.

Additionally, I would watch many rappers in the states writing lyrics and rapping over them. Consequently, when I saw that Hardcore was influenced by Hip Hop I thought to myself, wait a minute, I can do this myself without hiring someone else or sampling a vocal.

Why did you decide to use your own vocals rather than to go with another vocalist/rapper?

Because I am that dude, I am that guy that can do it all. I want to showcase my versatility , not only within production but within song writing, vocals, art, my entire brain is exposed to the listener and viewer.

If there were to be a label or genre to define this album what would it be?

Musical art. Cant put any other different way, its just some fly art by your favorite “pinkboi”

How long did it take to put the whole album together?

It began late/mid 2021 however I paused it for a few months and picked it back up in 2022.  Once I started to play more shows, and meet more people, the motivation and drive to finish the album became easy. People and music inspires me.

What feedback/reactions have you received from your fans with this deviation from our previous albums?

ALL positive reactions and feedback. I had big DJs from our scene personally reach out congratulating me on how refreshing this album was. I didn’t really deviate as 3 of the tracks are full blown Frenchcore. Additionally, I simply want to let other producers know that we can also immerse ourselves into other genres, and not be scared about the big’ WHAT IF’. Go and do your thing, and don’t let that inner self doubt mess you up. Take a risk, it will be worth the storytelling, trust me.

Looking to the future…

What advice would you give to up-and-coming artists who want to start on a new project or diverge from their usual sound?

Do it, don’t spend your life trying to think back on a ‘what if’. Just do it. Your true fans will fuck with you no matter what. All in all, so long as you stay true to your sound, the genre is irrelevant. The sound that you built throughout the years will remain no matter the genre. Just make music and learn from the analytics and feedback, oh and stay true to yourself don’t try too hard. The rest will follow, I pinky promise.

What’s next for you and the album?

Well I just released a major collaboration with Sickmode, Rooler, and Sefa titled “No one is like us”. I got a dope heavy remix I made that will be out on January (Afterlife Hardcore Label) , a big collab with a Russian group ‘DLB’ and some other dope collabs and solos for 2023.  However, the album is still growing an audience, so I’m letting it do its thing. I released a unique pair of  merch socks for it, a very limited yet lit shirt which Is part of my 3 big aspects of my career; Music, Art and Fashion. You can find more about this project within my website www.levenkhan.com