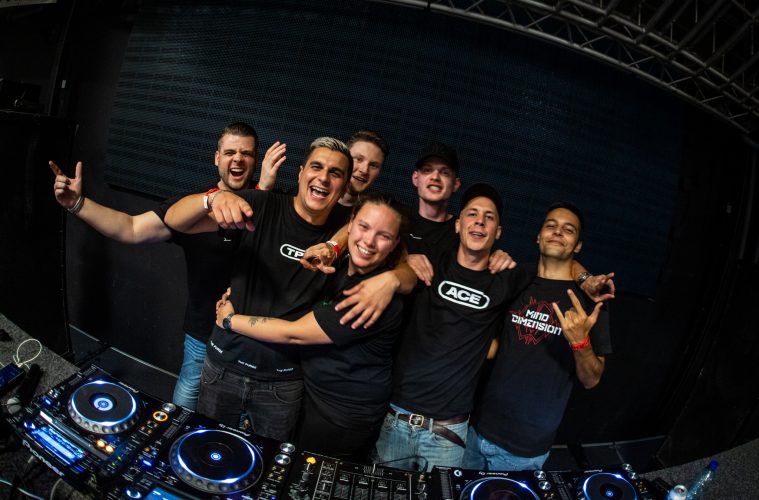 The former manager of Spoontech decided to seek new goals. Together with two partners he founded the new label – Savage Squad. Time for us to meet and talk to them.

The list of artists sounds familiar to most of us – Genox, Mind Dimension, Ace and The Purge. A promising and thrilling mixture around the former manager of Spoontech – Jordy van den Berg. At Spoontech he did an amazing job, and brought the label’s creativity to a higher level. For HardstyleMag – it was time to meet him and talk to him.

Hey Jordy, welcome and thanks for participating. Let us start with the question that perhaps most of us would ask you. Why did you decide to leave Spoontech?

I decided to leave Spoontech because my ambitions were changing overtime. I have been working within the label for 2-3 years which basically showed me the changes of the label overtime and how we as a management positioned the label the last few years. My goal was to start with a clean sheet in terms of music, branding and the way how to manage a label. At some point every entrepreneur wants to change the way he does things – both small and big – and I felt that at that point that it was the right decision to step out and hand over the ownership to somebody else.

Don’t get me wrong, it was a tough decision since the sound of Spoontech captured me many years ago at a point I could only listen to Spoontech. I will always be a fan of the Spoontech sound and I am grateful for the times I’ve had in the past and what kind of opportunities it gave me to prove myself worthy.

As we can see, most of the artists followed you – why?

I wasn’t the only one within the label that had certain ambitions to grow. Manuel (The Purge), Konrad (Genox), Alberto (Mind Dimension) and Roberto (Ace) basically had the same visions and ambitions to grow just like me and we made a decision to move on and focus on a brand new movement. I already knew that Manuel and Alberto had a dream to establish a label in the future and that’s basically where our paths crossed at that moment. We decided to take a leap in the deep and create a label where our ambitions and ideas came together. Savage Squad Recordings was brought to life and here we are!

What is the idea behind the label?

We wanted to establish a brand new movement. Not only music, but a complete experience for the fan. We tend to brand our label as an experience where people can be “part of the squad”. I always think it’s very important to listen to the “fans” (I hate that word btw) since they are the ones that basically assure us that we can still exist. If we talk about music, we basically want to release every kind of Harddance music. The most important thing is that we want to release music that we think that defines the future. We’d like to invest a lot into current- and new names that really deserve a platform to release their material. The idea behind Savage Squad Recordings is basically that we want to cover a wide spectrum of Harddance music, releasing both the Euphoric and Raw side of Hardstyle.

Oh, and if there is Industrial or Hardcore that we want to release that we think is the future, why not? We are here to create a movement, not a label where there are boundaries or borders where things aren’t possible.

How was the Label name developed?

At one point it just was there haha. We actually struggled a lot with the labels name and we basically created over one-hundred options before ending up choosing for Savage Squad. It involved a lot of brainstorming between us and some bottles of Sambuca and Aperol Spritz.

Can you say something about your artists there?

I’m really happy that I got the chance to work with these artists. I had a really good relationship with them during my time at Spoontech (and also outside of work) which basically resulted in a friendship with all of them. When you work with friends within the same company with the same kind of ambitions and mindset it’s really easy to work together. We even go on holiday together which is a huge source of inspiration for us. Past Summer we’ve been visiting Italy which was basically the kick-off of our label. Besides being drunk as monkeys, we actually created plans which laid the foundation of the rest of this year. I mean, how cool is it that you can convert your passion with friends into a real thing?

What for projects are coming up?

Our next big project is about to unfold at the beginning of next year which is the first chapter of worldwide domination. What this is all about will be slowly revealed in the next months, but we will assure you that we established our label with a reason and not tend to be a random side-project. Our motto is “They think we are stupid, but we are already one step ahead”, which fits incredibly well with our next project!

Which releases are coming up?

We are actually working on a few things right now. Past week we’ve asked talents if they could send us our demo since we actually want talents to release on a professional platform. Next to that we are working really hard within the label to push our quality of own music. We don’t want to bomb people with music, we want to release music when the artist and the label agree when the time is right.

Who is in charge of your label artworks?

Actually that’s me haha. I am a digital designer for quite some while and I’m in charge of the branding and design of the label. Not all of the artworks have been made by me since we are very eager to give other creatives the chance to design for our label as well. The creative direction of brands is something that has always been an inspiration for me. That’s why I’m in contact with a lot of fellow designers that create branding aspects for each and every artist within the label. Branding identities within this scene are essential to market an artist in the best way possible, that’s why we think it’s very important to create design aspects that fits the best with every artist.

How strong is the label affected by COVID19?

We would lie if I would tell you it’s easy. Live events are really important to premiere brand new music and without events a huge part of your marketing just flows away. Either way we just started with the new label so there isn’t much profit to be made in the first place, we moreover want to take this time to focus on establishing the label and make sure that we invest in the future.

Do you accept demos from other producers? If yes, where shall they write to?

Hell yes! We are looking for producers that blow us away. If producers have the sound that they think that will write the future we are more than happy to receive their demos. Producers that think they have what it takes can send over their demo(s) to label@savagesquad.nl​.

If you would describe yourself as an animal, what would you be? And why?

I would say the gorilla would perfectly fit me. The gorilla is an animal that both perfectly reflects the label and me as a person. The gorilla is a very trustworthy animal that takes care of the members around him. If the gorilla feels threatened and feels that adrenaline is taking over, it strikes. It’s a killer, but a killer with brains that has the heart on the right place with the mentality to become the king of the jungle.

What makes a track a good track for you?

For me it’s all about experience. Listening to tracks on live systems are way different than hearing tracks at home. I think it’s important that listening to certain tracks brings a memory with them, which makes listening to music so important for people. It’s bound by memories or events which happened in our lives. It’s hard to convince somebody from what I think is a good track, since everybody’s taste is different and changes over time. Actually what I think is important is that the track goes well both listening at home and listening at an event. Music has to create some kind of experience and memories for us as people, and I think that if a musician can create that kind of musical experience for listeners and visitors he is a full package artist.

I think Phuture Noize is a perfect example, this guy is creating music that is telling stories to listeners, and he really knows how he can tell these stories by creating live visuals and performances that gives both listeners and visitors an extraordinary experience.

If you could work together with anybody – dead or alive – who would it be?

Unfortunately my biggest musical examples, Chester Bennington (Linkin Park) and Keith Flint (The Prodigy), both sadly passed away. Besides being artistic masterminds they both seemed very passionate about their career and the things they did in life, which attracts me to work with these kinds of people. Actually I don’t have anybody who I would like to work with, since I’m still discovering how I exactly would like to work and what it could bring me.

If you would be stuck on an island and could only listen to 5 tracks – which would it be?

Jellyfish Rave all day man. Period. Or Sea Shanty 2 on loop. On a serious note, I am a huge fan of Psytrance and Ambient music so I would suggest that music from artists like Metronome, Liquid Soul and Jan Blomqvist would save my ass from being stuck on that island.

Stay strong. Music unites people and since we are living in strange times I would suggest people to respect each other’s taste of music. Since we don’t have events anymore it’s even more important to listen to music since it’s a pain reliever and also a way to support an artist. We should really believe in better times where everything will be normal again, and therefore I hope that everybody respects the rules by his/her government so that the process of going back to normal again will be even faster. Fuck Corona man, spread love and get rid of hate.

Thanks, man for the Interview – we wish you and your team all the best.