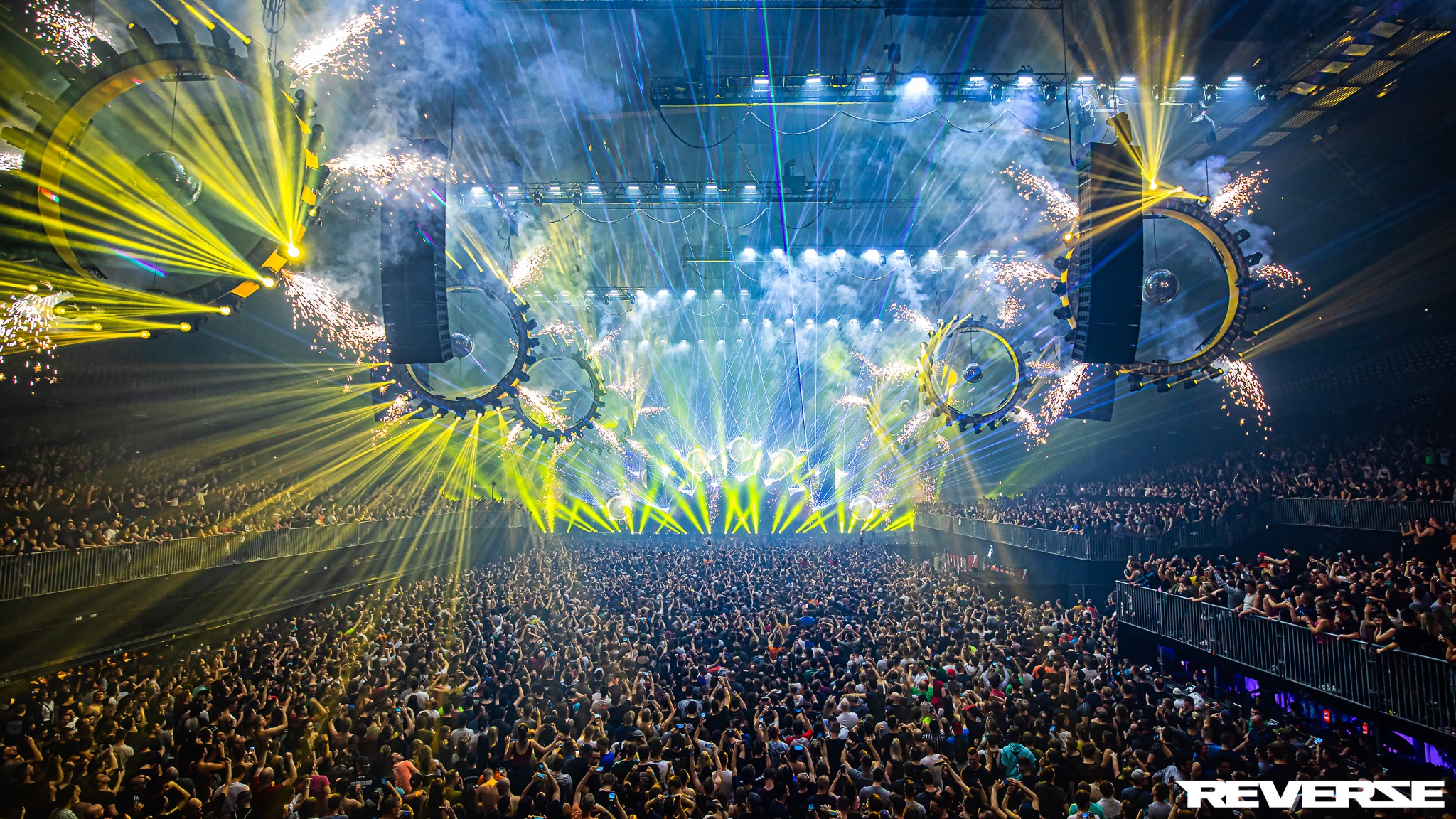 Every year at the end of February or at the beginning of March, its time for Belgium’s leading hardstyle festival – Reverze. This year it was all about to honor the 15th. anniversary of this event. Reverze lovers travel to this event year by year cause of epic lineups and a gigantic show – which usually gets presented in a nice storytelling event. This year it was Reverze – Power of Perception calling all Hardstyle lovers from around the globe.

For me, the party already started when I entered Hardtour’s travel bus at 7 am in Ulm. Luckily the bus was quite modern and we had enough space. The bus navigator was also familiar to me, so we directly started the warmup with good music.  We arrived in Antwerp around 7 pm and from the parking space, we walked over to the venue. Luckily the same bus brought us back home, and in total, I can just recommend to travel with Hardtours , cause it’s a really safe and convenient traveling – and you are never alone.

For Bass Events – this year’s edition of Reverze was meant to be a very special one, cause Belgium’s biggest indoor Hard Dance Event was about to celebrate its 15th. Anniversary on March 7th. 2020. The home was once again the Sportpaleis and the Lotto Arena – and according to the Billboard Magazine – the Sportpaleis is the second most visitant event hall in the world. Just Madison Square Garden remains on top of all. Stars like Beyoncé, Metallica, Dimitri Vegas and Like Mike already used the Sportpaleis for their concerts. While the Sportpaleis has a maximum capacity of 23.359 people the Lotto Arena can accommodate 8.050. As at Reverze there are usually two areas, these two halls get just connected.

Like the prior years, even this years edition was sold out in advance and visitors from all around the globe were expected to come.

The check-in was pretty easy. All visitors with a valid VIP ticket had to enter via the Lotto Arena and the holders of a normal ticket via the Sportpaleis. Due to the minimum age of 16 all visitors had to verify their age via their ID Card. The security guards were well educated and processed the whole body and bag checks pretty versed.

REGULAR TICKET 69,50 EUR / Free use of toilets /  Free use of public transport ‘De Lijn’ within Antwerp

The main stage was of course again located in the Sportpaleis, while the second and smaller stage was in the Lotto Arena. The Main stage was a huge wall with uncountable spotlights arranged in squares. Not noticeable at the first view, they only covered a giant led screen.  On top a huge metal architecture with metal braces, which created a futuristic appearance. Behind the DJ Booth a huge LED Screen in the shape of a semicircle was bordered with those metal braces. A highlight was those metal giant wheels hanging over the dancefloor. From these wheels, a nice and harmonious lightshow was added to the mainstage. These wheels moved around to form a row or to spread across the hall and from time to time, we witness fireworks coming out of them. So the SFX were not in front of us, but all over us as well. The sound was again at top level, clear and strong but never over the limits.

Indeed the stage on area 2 was way smaller but with a more puristic nature maybe better for the Rawhardstyle, which got played here. Lights and lasers got installed plenty and the ceiling was covered with LED fillets, which were connected with the stage, to illuminate the hall in various lights and colors. Similar to at the main, the sound was also perfect here. All tone pitches and lows were clear, the bass was present at every corner of the hall.

Both halls were equipped with toilets, bars and merchandise stalls. The sanitary areas were kept clean, but the staff couldn’t stand the rush over the full night. Thus, the later the night got, the dirtier the toilets became. In addition, every VIP area had a dedicated bar.

Reverze is usually known for its epic lineups – and in 2020 it has once more proven its aspiration, to be Belgium’s leading indoor Hardstyle event. Reverze – Power of Perception fulfilled this asperation with a huge lineup:

The Elite – Anthem creators of Reverze – Power of Perception

This year’s spotlight was definitely the set of this year’s anthem creator “The Elite”. The Elite – which comprises the Belgian DJ and producer Coone, the Dutch Hardstyle DJ Hard Driver and the Norwegian Hardstyle madheads Da Tweekaz. The special thing about this Team is the fact, that they all have been members of the Dirty Workz label for years now, and thanks to that this team is familiar with each member’s characteristics and oddities. The harmony arising from these factors can be seen when these guys perform together on stage. Tonight, their set comprised an edit collection of their solo classics from the past, which brought us all down the memory lane.

Of course, Reverze anthems of the past from the Dirty Workz members got played as well. So the crowd worshipped Coone’s – Deception, Hard Driver’s – Interconnected and Da Tweekaz’s – Essence of Eternity.

Surprisingly Hard Driver’s track „Welcome“ was altered to “Welcome to the Elite M*fck”, comprising new kicks and melodies. A moment of goosebumps when an orchestral version of Coone’s superman was played and a special version of “Toss a Coin” – known from the Netflix series “The Witcher” filled the air. No doubt, these guys delivered an epic set.

Another highlight was the set of the anthem creators for this years Defqon-1 2020. D-Block & S-Te-Fan. They directly kicked off their set with their “Feeling Inside”, which got followed by their “Rise and Fly”. Gigi Dagostino’s -Bla Bla made the whole hall scream along with these funny sounds. But only two tracks later – the whole hall instantly recognized the first sounds of the “Primal Energy” tracks. Once the known Defqon-1 voice said “Primal Energy” the complete hall turned into the full festival mood – “our instinct is what drives us”…”Surrender to the energy of the holy grounds we call home, this is where we belong —DEEFQOOON 1”. The whole hall screamed the melody, what an epic moment – the big wheels in the middle of the hall formed now a big row – and the lights showed a perfectly synchronized show.

But their set offered even more – right after the anthem – DJ Isaac appeared on stage to perform their latest collaboration Harder State Of Mind. This is really the kind of Hardstyle Music – the scene grew up with.

The annually returning set „Flashback” is kind of an institution at Reverze and this year it was Pat B, Dark-E, Mark With a K & MC Chucky who had the honor to honor the night. “The roof is on fire” started to announce the full dose of freestyle for the next upcoming 45 minutes. A warfare of revers bass and party sounds, like Zombination”, “Puta Madre” showed that the crowd was in the best party mood. Especially the moment when the whole hall sang Witney Houstons “I will always love you” MC Chucky confirmed the crowd`s talent. Back to the 90’s with Paul Elstak`s – Luv you more. The set got closed with the epic “Forever young“and a short early hardcore bass drum. That was really a good set to ease the atmosphere.

Another special moment was Mandy’s very first performance on the main stage. She was accompanied by the singer Jelle van Dael – she is known from Coone’s track “Superman”. Consequently, once here voice filled the area, the crowd instantly became silent – what an atmosphere.

And then the time had come, for the performance of Sub Zero Project – Rave into Space Live. A nice LED intro covered the whole LED screen at its full space – showing a journey through the deed space. And here raw kick came in, to start the intro of “Rave into Space”. Then they played their edit of Fisher’s – Losing it and the Intents Festival anthem of 2019 “Heroes of the Night”. Surprisingly after Sub Zero Project’s we discovered that a completely unknown track was played. A perfect match was Sub Zero Project`s bootleg of Cosmic Gates “Exploration of Space”, which just matched the overall theme perfectly.

One of the highlights of the night was the special “15 years Reverze set” by Brennan heart. His set comprised several of the biggest hardstyle tracks ever played. He opened up his set with Frontliner & Max Enforcers “On the Go” and by doing so – he directly spread the Brennan Heart magic over the whole place. Tracks like “Blademasters – Masterblade” or his legendary “Imaginary” made the crowd sing with the lyrics. Beautiful moment. Reverze – Power of Perception what an epic night!

Minus Militia finishing the crowd

At the edge of heaven and earth, the voice then announced – Minus Militia. Now it was time for the last Act: Minus Militia – The Code of Conduct Live.  Radical Redemption, Crypsis, Chain Reaction and MC Nolz immediately took over control with their “The code of Conduct”. Heavy Rawhardstyle kicks filled the hall now and the crowd moved forward.  MC Nolz showed once again, why he is the voice of Minus Militia. Again, and again the cheered up the crowd with his nasty and dark voice – R U READY? A special Reverze mashup got followed by Minus Militia’s – Just like that, and Nolz made the hall clap. But Minus Militia had a very special edition of their Minus Militia prepared. Now more than 190 bpm brought the crowd to its limit.

Beside this night, we paid the biggest respect to JNXD, who showed real dedication by playing a set with a clavicle fracture. Together with his friend MC Tellem, he rocked the stage.

Like we got used from major events, the Merchandise offer was once again vast and impressive. Trophy hunters got served with special Reverze, but also Dirty Workz merchandise. Luckily there were several stalls scattered around the halls – so we got pretty fast served.

A nice invention was the introduction of the Eco Token – to reduce the waste. The idea was, that this token was given to every guest when entering the arena. When buying a beverage – you had to give away your eco-token and it was refunded, when you brought back your empty bottle. For those who had lost their token, they had to pay EUR 1,00 for a replacement. Consequently, the area made a fantastic and clean impression. Even on the dancefloor, the waste was less than usual. Good thing!

For holders of a friend’s ticket, the organizers offered special group lounges, which were accessible via the Lotto Arena. Luckily the staff was very friendly and helped us to find our way. Equipped with a paper wristband – we could enter the lounge. Here a small bar and a food bar were offered. Surprisingly a small DJ booth was installed and here a set from Mandy or Sub Sonik was presented and the Artist had time for a meet and greet. Personally, we enjoyed the lounge very much – to take a short break and to take a breath.

Great work – Bass Events. Since our very first edition – you have always made it happen to surprise us more. The stage was impressive and – certainly the idea with the wheels was a big one. We really enjoyed the whole atmosphere and marvelous show. The Artists were on fire and either on the main or second area – the atmosphere was intense from the beginning to the end. Reverze – Power of Perception is definitely a night for the books. Consequently, the new date February 27th. 2021 is already marked on our calendars.