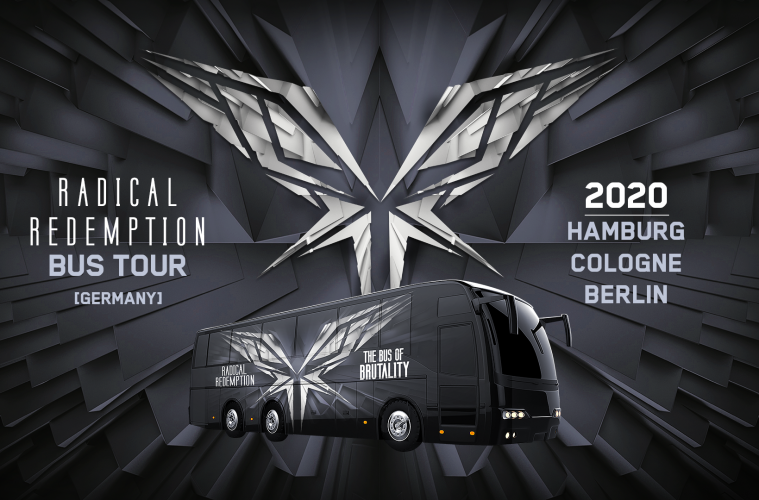 He is one of the leading heads ruling the raw-hardstyle scene. Since his debut album in 2012 “Anhilate” Joey aka – Radical Redemption – has experienced an incomparable hype which has reached every single corner of this planet. After his own event “Brotherhood of Brutality” in 2019 was marked again by a huge success, its time for him to start an insane bus tour in 2020. In Germany we are going to experience 3 shows. On thing is for sure, Radical is going to deliver again a superior performance on stage – which will be for the books. This man loves the music and he loves his fans.

3 Dates – 3 Locations what can you expect?

In each city there will be a special meet & greet organized, where Radical himsel will meet and talk to his fans. So better bring your pen and camera to get a pic and signature. In addition, there will be unique merchandise offered, which will be only available during that tour. So better safe your money.

Lets have a look at each city…

The legendary Docks in Hamburg city has already hosted a long history of events and is directly located at the well known Reeperbahn St. Pauli. Musical Madness invites you to

Tickets for the night in Hamburg are available here -> Tickets

Homebase of Musical Madness an its broadly known events. This venue is always turning into an inferno when the venue´s architecture and soundsystem combine their forces to unleash the hardstyle beats. Musical Madness invites you to

Tickets for the night in Cologne are available here -> Tickets

Welcome to Berlin. The ASeven is currently one of the most famous venues across Germany and the smallest venue of the three has the biggest LED wall – all around.Wanted invites you to

Tickets for the night in Berlin are available here -> Tickets

Consequently we need to ask? Where will we meet? There is no doubt, that this bus tour will become legendary, but make sure – you get your ticket !!