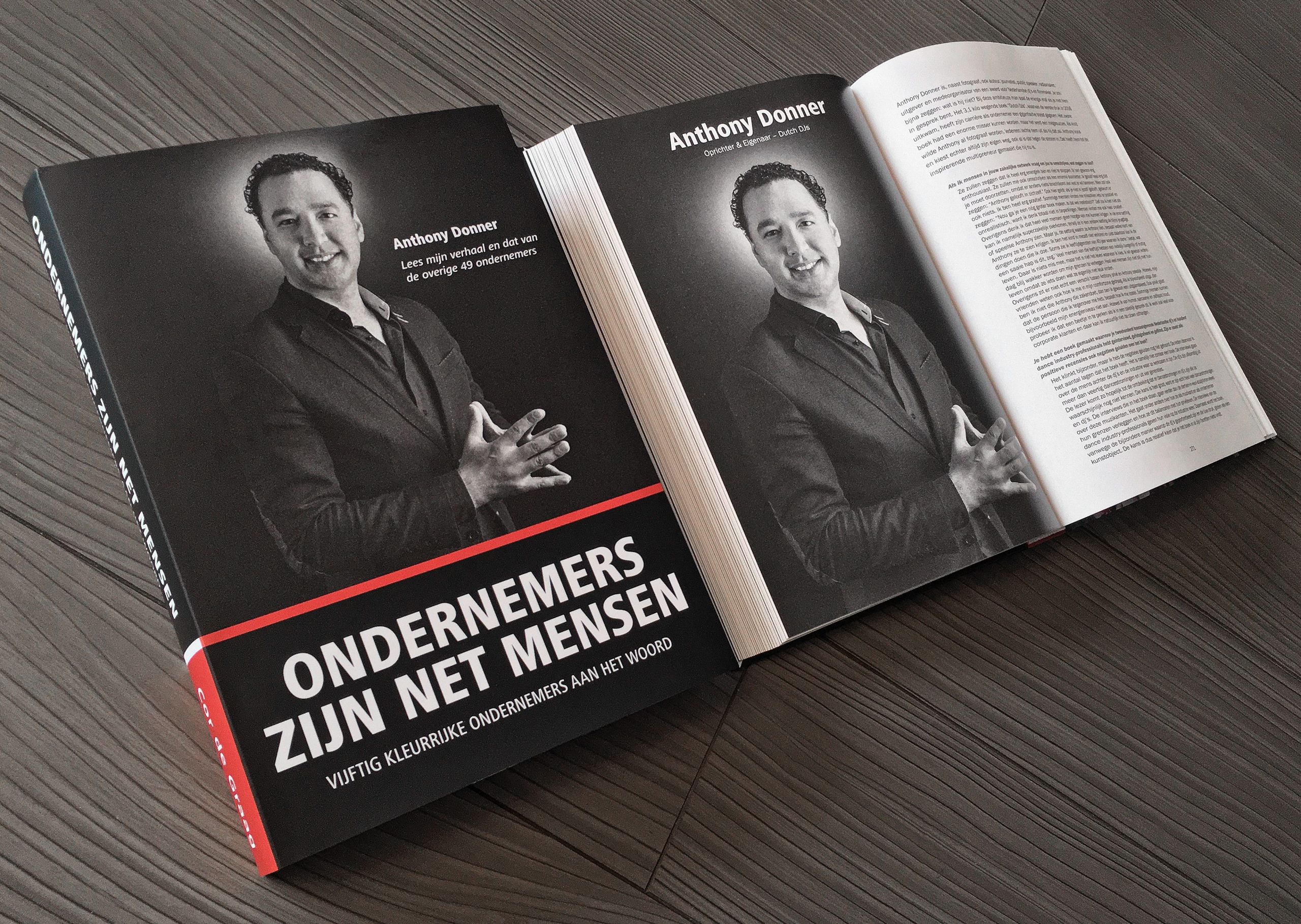 A book telling the stories about entrepreneurs, their projects and the people behind. Dutch DJs entrepreneur Anthony Donner was interviewed for and appointed as photographer of ‘Entrepreneurs are just people’ book. 50 top entrepreneurs share their story with author Cor de Graag.

The hardcover book, in which the author Cor de Graag interviews fifty inspiring entrepreneurs, tells the story behind these special people. People who come from the most diverse industries on 548 pages. Donner supplied the accompanying portraits of Vreneli Stadelmaier, Arko van Brakel, Souad El Markhous, Joel aan ‘t Goor, Maurits Groen and Zeyep Dag and many others. An interesting collection of people who dared to be vulnerable in order to share their story with other readers. The 2.8 kilo book offers a cross-pollination between entrepreneurs from different industries, ages and cultural backgrounds. Here Anthony not only did the photography, but also shared his own story with an in-depth interview. Anthony is the only journalist, photographer and dance entrepreneur who has been included among the 50 entrepreneurs.

For de Graag, the choice to use Donner as a photographer was a very logical one. It was an extensive job, for which Donner. He traveled from city to city as well as the countryside to photograph the entrepreneurs in their working or domestic environment. He photographed the entrepreneurs in his mobile studio which he set up on the spot, and that resulted in extraordinary portraits. Among the impressive bio-interviews of 49 other top entrepreneurs, there is also the 10-page story of the dance entrepreneur himself. In which he tells how he has constantly developed within his entrepreneurship and, besides a career within his field, has set up many other challenging projects and collaborations.

As a portrait photographer he also works for various magazines, communication agencies, educational institutions and companies. And currently he is working on his second and third own book.  Anthony mainly portrays CEO’s, high management of companies, artists and entrepreneurs in his recognizable style.

Anthony Donner created a furore as a photographer and author with the Dutch DJs book. For which he photographed, interviewed and filmed 300 leading Dutch DJs and dance industry professionals. During his Dutch DJs project he continued to grow as editor in chief of the biggest DJ/dance magazine in the world; DJ Mag and the biggest hip-hop/urban issue, Pleasure Magazine. He is now busy with the sequel of his first book, the Dutch DJs XXL book. With more than 400 photos and interviews with the most famous DJ’s from the Netherlands, this will be the biggest music book in the world with a weight of no less than 11 kilos.

In addition, the entrepreneur is working on a large scale photo book with interviews about Dutch top athletes and he is working on 2 magazines, the Dutch DJs magazine and This Is Hardstyle magazine, these will be published next year. As if that is not enough he will launch the first DJ Award for Dutch DJs this year. And as soon as the elections for the Night Mayor of Amsterdam start he will stand as a candidate. With all this Donner shows that he knows how to combine his passion for dance and love for photography and sports in an inspiring way.

Read more about the DJ Marathons