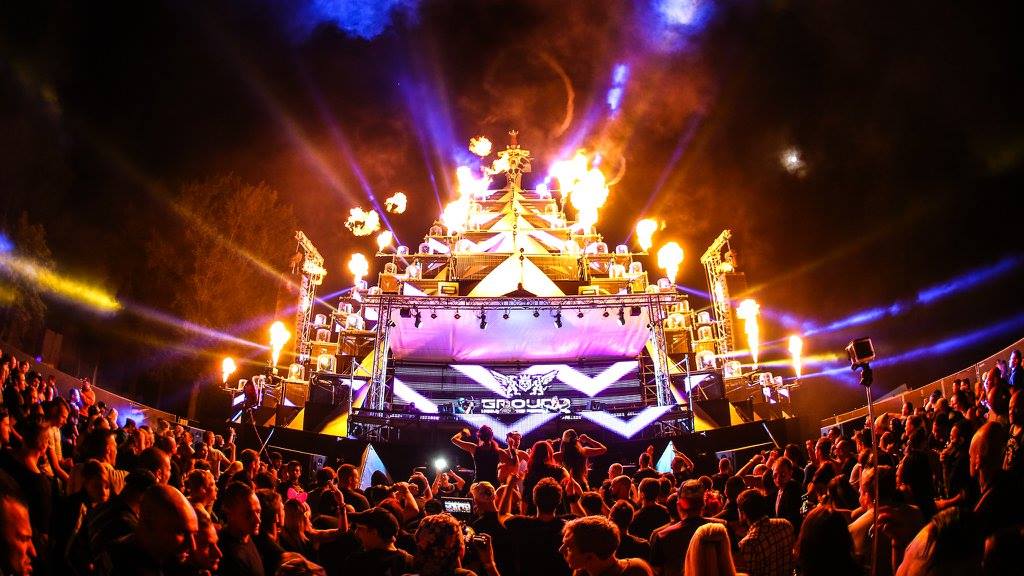 We left Zoetermeer and  had a relaxed ride with a just a few stops. During our travel, we had a warm-up set of hardcore music blasting loudly through the speakers. We arrived right on time at the parking area of Ground Zero Festival. A nice trip with our partner EventTravel.

Starting at the hardcore main stage we visited D-Passion vs The Wishmaster for a while. What an amazing sight we had. The hardcore main stage was a big pyramid packed with lights and lasers. At the top there was a sword with a skull. In the background, far away, you just saw the full moon, which perfectly underlined the feeling and atmosphere of the festival – only at Ground Zero, the night festival!

Then we went for a walk to discover the beautiful area of Ground Zero Festival. What a great experience, the dark woods surrounding the festival made you feel like you’re in a backwoods slasher film – isn’t it the typical horror movie area?! We did buy a locker (7 euro), beer goes for 1 token, water for 2. And you could refill your water for free! All that was well arranged.

After our discoveries, we went back to the hardcore main stage again. Furyan vs Pandorum played a loud and rough set, giving the good vibe we expected. The sound system was perfect at this stage. A hard f#cking bass was blasting through the speakers. But also the mid- and high tones were well balanced. Let’s have a look at the RAW stage now!

The rawstyle stage was in a tent. Not that spectacular, but the vibe was great! It was not fully packed inside the tent, so you could still ‘shake your body’, but the sound was not that loud. In the middle, and the front of the tent you could hear a nice hard bass, but at the edges of the tent the sound wasn’t optimized. We checked out the set of The Prophet and Kronos. The Prophet played well-known tracks including some Hard Attakk tracks. Closing his set with the new track ‘Nasty Bass’, he played a solid set.
Kronos entered the stage, opening with ‘BOOM BABY’. Still a lovely banger! After that he played a lot great tracks including ‘Fuck the System’ with Zatox.

Let’s go back to the hardcore main stage again and dig deeper into some highlights of the evening. The heavy stuff! We entered Art of Fighter’s set while playing his track with Meccano! You know that track, DISORDER! DISORDER! After that they played tracks like Hellfire, Devil’s Mind, and the brilliant Bootleg of Skrillex; Ragga Bomb, what a track!
Unfortunately the sound system failed for two minutes, and complete silence took over the stage. Ending with their Goodbye song, we can say: ‘See you next time AOF!’ Time for Meccano Twins!

The first time we saw Meccano Twins, finally! And they didn’t disappoint me! One of the better sets of the night in my opinion. I didn’t know many of their tracks. But that motherf#cking bass. Hell yeah, they played a loud…loud set. Great work!

The crazy energetic Italian Noize Suppressor was next in line to play his LIVE set. Playing tracks like Jack ass sperm and Break it down. The main stage went totally nuts! Energetic as always, slamming on his decks, jumping in the air.

We went to the RAW stage just in time for Crypsis. There was a big storm coming and we already felt the rain. But luckily we were inside the RAW tent at this time joining Crypsis. Playing tracks like ‘Raw to the Fucking Point’ and some classics by Minus Militia. Indeed, he played a solid set but not that spectacular as we expected.

This set was our highlight of the evening. Unexist played a brilliant LIVE set at Dominator, so our expectations were high –  and what a great set this was. Playing with The Punisher, and ambassador of the hardcore main stage; Tieum. It was hardcore at its best! High bpm, a loud bass, kick drums everywhere, massive energy at the stage and the crowd, amazing!

Tracks like ‘Blaze it Up’, ‘Music is my weapon’ and ‘F#ck the system’ came along. We went to the front and joined the crazy motherf#ckers at the front. Unexist joined the audience, by doing a little crowd-surf, the mood was just crazy. Together with The Punisher they went crazy on stage, while Tieum played more amazing tracks behind the decks. What an energy these men have. Great atmosphere! This was the sound we loved and enjoyed most, even as a hardstyle magazine! Just because the DJs made it a great experience.

This Italian squad did the closing of the main stage. The sun was rising, and we knew the end is near, sadly! All the sets were pretty nice, as was this festival. An amazing experience. After a 10 hour ride it all came to an end, the music stopped playing – this was Ground Zero Festival 2015.

The festival grounds radiated in the dark. With abandoned fields, but also with haunted houses and a Ferris wheel, there was a lot to see. Smaller stages were a bit hidden between thick wooded areas and in narrow alleys or placed in small areas and tents. The quality of the audio was brilliant at the hardcore main area. At the other stages, the quality was a bit weak, but still okay. Of course the obligatory chill areas were placed all around the festival and you could even play Call of Duty… very odd but nice.

At the hardcore main stage you had a nice view across a lake and an epic full moon above! Just stunning! We paid some short visits to the psy stage, crazy people over here! The industrial was loud and rough, next year we will definitely pay more attention to this stage! Another awesome stage was the Ruhr G Beat stage, it did look like another main stage. It was crowded from the beginning till the end. With many up tempo hardcore acts, like The Stunned Guys. A negative aspect was the small amount of toilet areas. It was not very crowded, but the walking distance from stages like the main hardcore was a bit too far, so you missed a few tracks.

There was a relatively normal range of food and drinks, so was the price. One Token for a beer or soda. And two for a bottle of water. You could buy chips, pizza or burgers, ice cream and more. All for a good price.

A grand event, we truly enjoyed. What a great party Ground Zero is! Definitely a must see for anyone, who loves the harder styles. A unique concept and one of the craziest night festivals, no, one of the hardest, but also coolest festivals in the Netherlands. For 50€, it’s a perfect festival and can certainly compete with huge parties like Dominator. Mark Ground Zero 2016 on your calendar. This event should definitely not be missed!

This trip was sponsored by EventTravel.nl