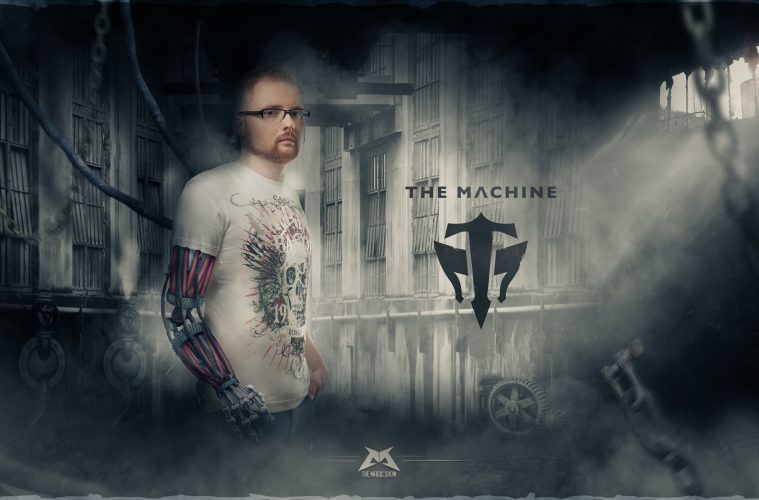 Interview with The Machine

Hey Ramunas, we are very excited to have you as an interview partner! We hope you enjoyed the Ground Zero festival as much as we did. We always try to find new and exciting stuff for our website, but also for our magazine. With this interview we hope to create a new connection between you and the german hardstyle scene.

A1: I played on Ground Zero before in 2009. Ground Zero is very special for me, because back then it was the first Dutch festival that I had ever performed on.

Q2: You must have been very nervous back in 2009. But when you look back, did you enjoy your first set in front of a Dutch / international crowd?

A2: I was nervous indeed, I wasn’t comfortable on stage like I’m now. But I still really enjoyed the set

Q3: Where did you play before the performance at Ground Zero in 2009?

A3: Before Ground Zero, I had performed already at various parties in Finland, Estonia and Lithuania.

Q4: Do you have a country, club, festival you definitely want to play once?

A4: I do have. I’d love to play in as many countries as possible, the further away the better. Australia, USA, Canada and Japan are definitely on the list.

Q5: We really enjoyed your live set at Ground Zero and we felt like you did, too! You played your new track „Bassline Skanka“ right in the beginning. How did you feel, when you saw the crowd go wild with it? Is there a different feeling when you play new tracks – are you nervous/excited?

A5: Thank you! I felt pleased with the result; I don’t make music only for myself, but as well for the party people. The moment when the people go crazy on your track, that’s what really matters. When I play new tracks I’m usually excited and looking forward to the crowd’s reaction. Sometimes I’m also nervous because I still doubt myself about certain parts in the tracks. The crowd reaction can help me then to decide how I will finalize the track at the end.

A6: Sure, sometimes you don’t get the crowd to respond in the way you would like them to respond. But it doesn’t always have to do with the track. A new track should be brought to the public at the right moment in the right place. So, I usually relative whether it was really the track or just the wrong moment to play it.

We guess it’s hard to answer that question and it’s definitely a worst case scenario! Let’s go back to your Live act!

A7: Most live acts in hardstyle are different because the artists make special edits of their tracks for the performance. A lot of stuff gets prepared before the performance and that for some people tend to say that it’s not really “live”. When I perform live I try to make a good mix between interaction with the crowd and a performance where I can adjust the set and tracks as much as I want to keep surprising the crowd without losing the flow. Of course I also make special edits of my favorite tracks before all my live acts. On top of that I am mixing the tracks together live. With controllers I use I can also play live samples and add extra effects and FX on the tracks. On stage I try to connect with the crowd and give them the ultimate live experience.

This sounds great! We can’t wait for the next chance to enjoy one of your live acts!

Q8: Your next big performance was at Loudness 2014! We were very happy to see you in the Line Up. Did you prepare something special for this night? A lot of other live acts such as B-Freqz working on edits of their tracks, only for their live performance. Did you plan something similar?

A8: Thank you! Of course I was really thrilled to perform at Loudness again. I spent a lot of time for some new tracks and edits that I wanted play for the first time at the party. I was working the last months with Chain Reaction on a brand new collab and the plan is to premiere it on the event.

We can’t wait to hear your collab between you and Chain Reaction!

Q9: How did come in contact with Chain Reaction for a collab? We hope for a banging combination of the two styles!

A9: Ben and I have been talking about making a track together for years. We have played on some festivals together and always have supported each other. I’m really happy with the track that we created. It’s a little bit different than the usual tracks you know from us, but definitely a killer. The track will be released in the first week of December on The Magic Show Records together with 2 other tracks of me.

Q10: These were a few questions about your performances and your Live act. But for us, as a magazine, there is something very interesting about you. You’re coming from Lithuania! We guess a lot of people didn’t now this fact.

A10: Indeed, most people don’t know that I’m from Lithuania. It’s a small country and we don’t experience many big dance acts around here. So it might be quite surprising indeed.

Q11: How did you come in touch with hardstyle? I mean hardstyle is not that big or popular in Lithuania. Can you tell us about your first steps into the world of hardstyle?

A11: I came in touch with hardstyle music back in 2002 after hearing Out Of Grace – 140 (Deepack Remix) on the Sensation Black CD. Honestly, I didn’t even know it was called hardstyle but I got really thrilled by the sounds I heard in it. Not much later I heard some tracks by Trilok & Chiren, Dj Luna and their alias DHHD. Their track Funky Shit was really the bomb!! In 2003 a friend showed me videos from Qlimax. I got hooked and subscribed to the global hardstyle Forum to get more involved.

Q12: When and how did you decide to start an own career as a hardstyle artist? And better, how did you start with music production and DJing?

A12: I started learning the first steps in making music quite some time ago, when I was 11 years old, on a PlayStation program called Music 2000. I really enjoyed arranging loops, making small melodies and recording them to tape. Since then knew that I want to make music. The problem was that I didn’t have any friends who were actually making music and I didn’t have internet back then to expand my knowledge. I kept playing around and started to teach myself the basics of music, arrangements, but that was about it. My career as a musician/hardstyle artist started when I discovered the Global hardstyle forum. After registering for the community I got stuck in the producers section. I learned a lot about music production while reading and interacting with other community members. I wasn’t only learning more about hardstyle but also about how to produce the music. Meanwhile, my brother was a DJ and I asked him to help me learn to become a DJ too.

So everything started on a Playstation, what a crazy story! After a long evolution as a producer and Dj to your current status and music making skills we can definitely say that …

Q13: Your current tracks such as Within Each Of Us, Rolling, STOMP! or Natural Born Killer (The Machine Remix) are truly masterpieces! Each track is different, but still representing The Machine sound! Where do you get your inspiration, and why did you decide to make a remix of Adaro’s and Digital Punks track Natural Born Killer?

A13: Thank you! I get inspiration from all sorts of things. It can be coming from a sound that I’m working with or from a kick, vocal or different tracks. Adaro wrote me a message at the beginning of the year. He said he really liked my latest stuff and if I could make a remix of Natural Born Killer. I really liked the original song and I was very proud to be allowed to remix such a big track of these two legends in raw hardstyle.

Q14: We guess it was very surprising, when you read Adaros massage, i mean you probably don’t get messages of these every day. How was your reaction to it?

A14: I think that I had to read his message like 70 times before I realized what it said. At that moment I definitely was one of the luckiest people alive.

Q15: Your Facebook page instantly grows bigger and bigger, but also you as an artist. More and more performances coming up. We guess it already has been an amazing year for you. Can you name some special moments? Maybe performances you won’t forget or releases which you are very proud of.

A15: I definitely won’t forget any of the performances I had this year. They were all very special to me and I really appreciate the opportunities I’m getting now. It’s very special to me to see people dance to music that I made. One moment that I really won’t forget is the first time that I saw someone with a flag with my logo and name on it. I never thought I would have a fan like that. Releasewise I’m very happy with the tracks that I produced this year. I think that Rollin’ was one of the biggest floor fillers this year and all other tracks have received great support by my own heroes such as Headhunterz, Ran-D and many more. Thanks a lot for that everyone!

Q16: The last question. How do you see the german hardstyle Szene? Did you recognize it? Did you ever go to Germany or had a performance here? And last but not least: Do you want to say something to your fans?

A16: Germany has always been a country that has a big hard dance scene. You have some really cool artists coming up at some of the biggest hardstyle labels. I haven’t played in Germany before, but I hope to be there soon and meet you all. Thank you for interviewing me, it was a pleasure answering your questions.

Thanks for your time! We, the HardstyleMag community, wish you all the best on your way to become a known and exciting artist in the raw hardstyle scene. See you soon at one of your performances!