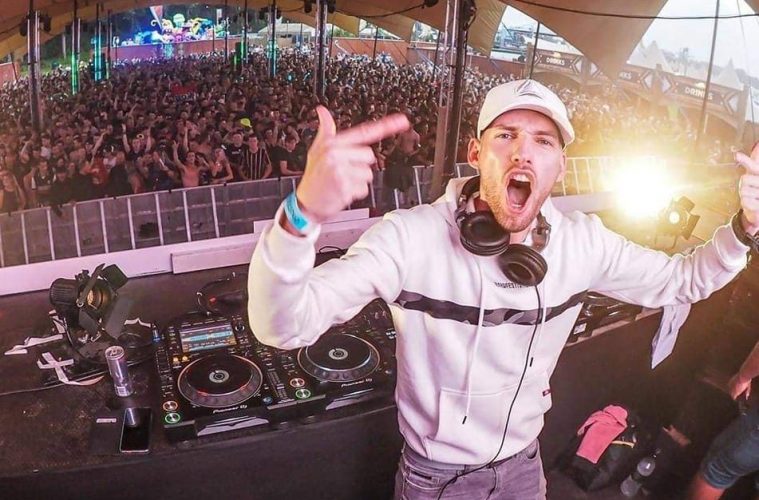 We sat down with Trespassed after his set at Inurfase Massive: The Shining at Bootshaus Club in Köln, Germany. We chatted with him about his thoughts on the party, his unique way of entertaining the crowd, and the one track that took his career to the next level.

*To read the full review of Inurfase Massive: The Shining click HERE.

* This interview was recorded at Inurfase and then transcribed.

So you just got off stage from your set, how do you feel right now?

I feel really amazing, but I’m still a little bit tired from the whole week. I went to Croatia and then had Pokke Herrie in Oberhausen Germany of course and Scotland as well.

Wow, that’s a lot! How do you stay motivated and energized with all those bookings and all that travel?

I think the important thing is all the energy from the people and all the excitement. When you read it off their faces and they are like “Oh finally he’s here in Germany!”. I’m not playing that much in Germany so I hope to get more gigs right here, but [it’s tough]. At the beginning [of the set] they were a little bit like pulled back but after that the few tracks that I played they were finally getting comfortable. They were moving to the beat and reacting to the things I said in the mic, because we have no MC of course. So, it was pretty good.

I was there for the whole set and the crowd reaction, it was amazing, it was great. One thing I noticed was that during your set you take people’s phones and make videos for them while you’re performing. When did that start?

When you do that once, everyone wants a video as well. I take my time for it, like if you wait a second I will do it for you as well. Its not a good idea to be honest, but sometimes you have to enjoy your set and do what you think is good. If you want to make people happy and gain more trust from the people who listen to your music or [who attend] your sets you have to do two things at the same time.

How many videos do you think you took tonight during your one-hour set, can you guess?

Maybe like 10 or maybe 15 videos. Sometimes I got two cameras at the same time as well. You make the best out of it, you want to give them something to remember you by. You have to take that chance. Especially for them, they need to remember me when I’m going to Germany. Then they see me and they come to me and say thank you for the video. I just want to be there for the fans because they have to listen to my music and they have to find it [enjoyable].

Is this a trend you’re going to continue? What if you play at a big stage like Defqon and people are throwing their phones at you?

The good thing about that is the stage [at Bootshaus] and where the audience is maybe 10 meters maybe longer and the stage is like two meters high or something like that so that will be a harder one. Most of the time, the MC will take it over and then they film from behind. [However], when I see a camera I wanna show my best side its not being fake its you have to show them what’s it all about like I used to go to parties as well and I want to show them that even when I’m a DJ I’m just like you.

I think that comes across on stage, you have so much energy, interactive with the fans and getting them hype. So, do you have any pre-rituals that you do to get you in the zone before the set?

Its all improvised, everything has to be different, everything has to be in the moment. You listen to what’s being played, you look at what they like and they don’t like. Then you’re [going to] improve yourself throughout the sets. You’re going to adjust everything to their liking you know like every audience is not the same. They want to hear this style or those tracks and you don’t want to play other [people’s] tracks performing on the same night as well. So that’s why I keep improving and if you do it like [freestyle] you just go with the flow you use your first track it is important it has to be hard people have to stay of course and then the last track has to be massive you have to leave a good memory for them.

So does it depend what country you’re in? For example in Croatia did you play a different set than you would in the Netherlands or here?

Always, when I gotta play, I’m always there two hours before my set. [I stay] at my stage listening to the music and looking at the people what they would like and then I’m only thinking okay they like  a style like this, they want to hear these kinds of tracks, and then I gotta take a risk a well, I want to know if they’re going to like this kind of track or this kind of style. So you want to let them try some new stuff because if they don’t taste it they never know how its going to be. Sometimes you have to take risks, if it doesn’t work then you fix it and then go back to the regular style. If I know that they don’t like this then I try something else. I keep improving myself and looking throughout the sets. I’m focus [even when] I’m not feeling that well while playing and I’m not comfortable, but it’s a tough job. People think its easy to be a DJ but getting the pressure from the audience [makes it] way harder and I want to keep improving every set I play.

Are you ever surprised with what people like? For example, when you play something that you think people won’t like and then they love it?

Yeah that’s mostly the tracks I make. Sometimes when I make a track in two or three  days or sometimes [even] one day, I think lets see how its going to do. Then the first time I play the track people don’t like it. Then the second time I play it they love it. People going crazy, they’re going to film it and then message me on Instagram and WhatsApp or even snapchat. Then I have to finish the track as soon as possible. Some tracks that I made earlier on and I released them, but then after it was released the streams go [through the roof]. Monthly, I have 185,000 people listen to my music. Then almost like 800,000 or 900,000 people are streaming the stuff. I think that is a big improvement. Before corona I had like 60,000 people listening to my music. Then you make one hit or one track that people really like and it goes off the charts. For a guy like me, I think that’s the most important and the best thing you will ever feel. Its even better than everything else.  I won’t say better stuff than getting a kid or like you know what I mean? But it’s a really good feeling.

So what track did that for you and took you from there to where you are now?

I think its Xearo’s Box, its actually a remix by Xearo himself. The original track is actually Xearo – Pandora’s Box that is the original track. He never released it officially. So we had to make an adjustment to the title so that my name would be in front. I asked him if I could release it like this and he said you have my blessing just release it. He [also] said I’m curious to see what it is going to bring you and me, of course. It’s almost at a million right now so that’s really amazing. Another track [that did really well] was featuring MC Robs and its called Terrified. I like the track and I played it a few times. At first, I didn’t get any response from the audience. I was like okay should I release this track? Or should I just leave it don’t touch it anymore and keep it away? After the release it got some hype on TikTok because people were going to the gym and playing this track. It went massively and I got like 300,000 plays in one month and that is truly amazing. [The plays are] still going up, I got like new fans I got like new people that messaged me on Instagram and that is giving me a good feeling.

So, last question, what are your overall impressions of tonight of the party?

The sound is amazing and the people are amazing. Usually when I am in Germany the audience [holds back] and only listens to the people that they know. They don’t want to take a risk by going to see [an artist they don’t know or never seen before]. If I have one tip for people going to the party it’s just take the risk and stay for an artist that you don’t know. Lets see what he has in his power and what tracks he makes [even if you don’t know him at all]. I think a lot of people did it here tonight so that’s a good thing. Mostly when I’m in the West of Germany or when I’m in the North of Germany or in the South people [only want to see artists that they already know]. If they take a risk to go to an artist they don’t know, especially like me or new talent that’s the best thing. If you take the chance and listen to the new artist, the new bloods and be always interested in new music. Just never stop improving, just go with the wave and never stop changing. The newcomers need a chance as well. They make good music, they earned their spot to open and they got a chance. You guys also have to give them a chance, not only the bookings agencies but YOU have to give the artist a chance. Just stay there and listen to his music and if the artist is good [then stay] and if it’s like 15 minutes in and you don’t like it then it’s all yours.