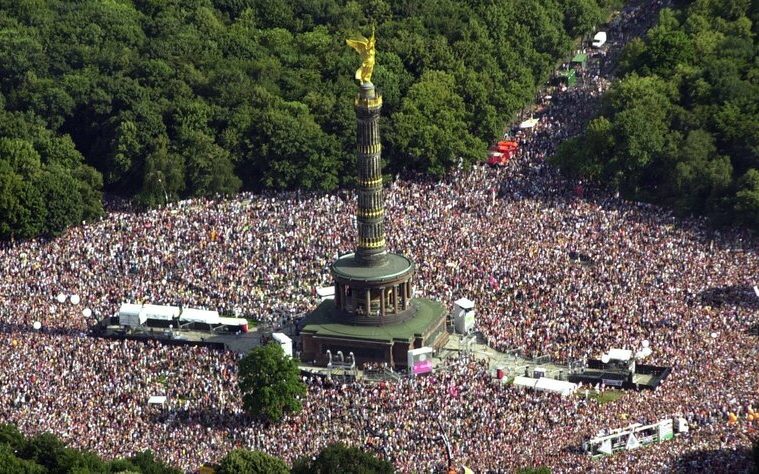 LOVEPARADE – MORE THAN A FESTIVAL – EPISODE 1

When one thinks about Loveparade today, many only remember the terrible tragedy of 2010 in Duisburg. By that point, commercialism had destroyed the original concept; it was no longer about peaceful celebration and demonstration, but big money. But the original spirit was unique and is still unreached. In two episodes we present you a deep dive into the Loveparade. And in the end – why you can bring the Parade to Berlin.

But who can still remember what the first Loveparade 1989 in Berlin actually stood for? Where a couple, Danielle De Picciotto (35) and Matthias Roeingh (Dr. Motte) (39) came up with a concept that stood for peace, joy, and pancakes! Where these three things had meaning: peace stood for disarmament on all levels, joy for the interpersonal, and pancakes for a fair distribution of food all over the world.

The Loveparade is born

The parade started on July 1st, 1989, Dr. Motte’s birthday, in front of the Zoo’s train station, across from the Kurfürstendamm in the direction of Olivaer Platz. After just six weeks of planning, 150 people, three cars and a generator to power the loudspeakers on top of the cars, everything came together for what would kickstart an incredible movement! Such a thing is hardly imaginable today!

Two years from when the parade started, the number of attendees had already risen sharply to about 2000 people! The organizers put this down to people spreading the event by word of mouth, and the opening of the borders in November 1989.

Rave the Planet: Read here how to bring back the Parade!

In the third year, publicist Jürgen Laarmann joined the team. Laarmann worked on turning the Loveparade into a national event. Laarmann also created the first Loveparade poster (the one which everyone still knows today), which was designed by the graphic artist, Alexander Branczyk. That year, the Loveparade motto was ‘My house is your house, and your house is mine.’ 6000 participants attended the event that year; it was considered the first national gathering of all the various nationwide techno scenes. For the first time, activists from within the scene traveled to Berlin (coming from all over Germany) to represent their regional techno culture – leading to the creation of a network of connections between the different sub-scenes. The groups from Frankfurt Am Main and Cologne even had their own truck. Which is where Westbam and Marusha performed the music video for Westbam’s track ‘I Can’t Stop’

However, already around 1991/1992, people began to have doubts about the Loveparade. Some were afraid that the event would be affected (and changed) by the commercialization of it.

And, truth be told, everything was on the up since then. MTV referred to the Loveparade as the ‘German summer love’ and the ‘Frankfurt Posse’ organized (in 1992) a special train to run from Frankfurt to Berlin. In 1992, there were 15 trucks that made up the event. In addition German television reported on the event for the first time. Already in the following year (1993), you could already see that more and more people came from different contries.

By 1994, there were already 40 trucks blasting music, making up the entirety for the event. One can imagine the kind of growth that had happened between these years, growing from 15 to 40 trucks in the space of 2 years.

Shortly after, the Loveparade had grown to something that was too big for a couple of guys to handle, and in 1995, Jürgen Laarmann, William Röttger, Matthias Roeingh, Sandra Mollzahl and Ralf Regitz all founded the Love Parade GmbH. The company exploited the trademark rights of the event and was responsible for the realization and acquisition of financial means. In that year, the first major criticism of the event came from its status as that of a demonstration, as many costs (such as garbage removal and clean up) were paid for by taxpayers. Additionally, the demonstration had to be rescheduled in 1995 as there were many events taking place on that very day, such as the CSD and the wrapping of the Reichstag. Therefore, after lengthy discussions with the city, a shift of the date as well as extra stipulations, such as better security and garbage removal requirements.

No longer a demonstration?

However, a discussion within Germany had started regarding the future of the Loveparade. The Senator of the Interior Deiter Heckelmann saw no further right to allow the Loveparade to maintain its status as a demonstration. Thus he wanted to have it revoked. Although this was not supported in the senate, residents and local businessmen began to take Heckelmann’s side. More and more international visitors to the event meant more commotion, and the Kurfürstendamm could simply not take so many people.

Fundraving: Help us to bring back the Parade

As a result of these discussions, an alternative route for the parade was sought for the 1996 edition. A route was finally settled on: from Ernst-Reuter-Platz via the Victory Column to just in front of the Brandenburg Gate and then back to the Victory Column.

The Loveparade was unstoppable

With the ever-growing size of the event, the inclusion and participation of various clubs, labels, and sponsors also grew. And, owing to the space next to where the parade took place, there were legendary ‘spin-off’ raves that took place side-by-side.

In 1996, 100 different organizations applied to take part in the event, each with their own truck, with 40 given permission to participate. Around 600,000 – 700,000 visitors attended the 1996 edition, where MTV had their own truck and broadcasted the event. This was the year were the first final rally took place on a specially-designed stage (at the Siegessäule) with Dr.Motte. He committed to building peace and international understanding through music.

Everything was about music, peace and harmony

Today, there are often high crime rates associated with large events. But not at the Loveparade. The police only registered roughly 100 crimes that year. Considering that there were more than 700,000 people celebrating together, this was not a lot. And you can quickly get a feel for how the Loveparade was more than just a party. It was a statement to the world, that diverse people can be peaceful together and that music is the unifying factor.

In 1997, a split began to take place. The Gabber and Bunker scenes organized their own street demonstration. They called it the “Hatparade” or, as it is known since 1998, the “Fuckparade”. Whereas, political messaging was allowed at these events, sponsors and any other forms of commercialization were banned.

End of the first part

Oh yes, the times in the 90s were really special. The world experienced a new movement never seen before. The techno music, seen as music for underground parties – unveiled now its potential, to unite people from different countries. Music is the key.

But the journey continues, and we will soon bring Vol. 2. Keep an eye on our page.