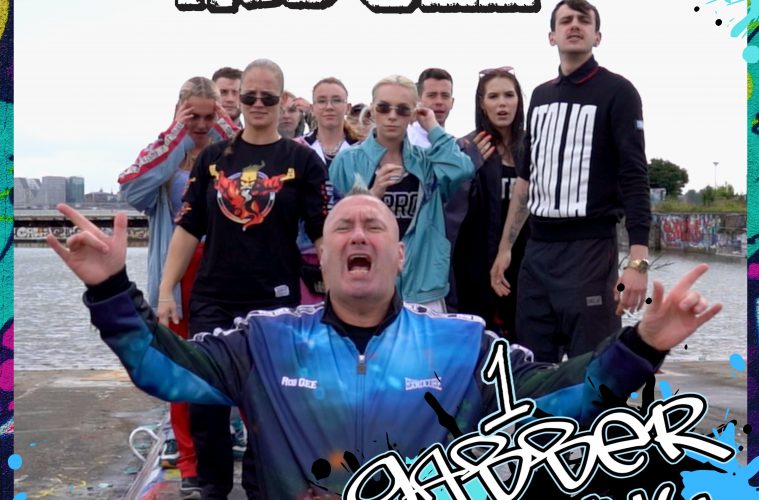 On April 8th, American Hardcore DJ and Producer Rob GEE released a new track entitled “1 Gabber Family”. HardstyleMag got an insider look into the story behind this epic track.

Rob GEE’s new track tells the tale of what the gabber scene was like in the 90’s, a time before there was a “core” for every type of sound. Moreover, the track dives deeper into his personal story of how a prank track led to Rob playing for the very first time in Rotterdam and ultimately having a number one track on the charts.

A trip back in time

In 1993, a young DJ and Producer from New Jersey who we know today as Rob GEE exploded onto the Gabber scene with his instant classic single “Nonshlentustokken” – ‘Ode To Vortex’ which claimed the #1 spot on Thunderdome III screaming the iconic word we still hear at parties today “Doshemeklota!”. The history behind this track is equally as fascinating.

“Rotterdam is Full of Shit”

“Nonshlentustokken” was originally intended as a prank to defend DJ Paul Elstak and the Rotterdam Gabber Crew from a group of NYC Producers who thought making a track “Rotterdam is Full of Shit” was a good idea (unsurprisingly this track caused a stir in the scene). Long story short, a retaliation track to a diss track ultimately led to Paul inviting Rob himself to play at his first international show at Nightmare 4 in Rotterdam.

From New Jersey to the Gabber Stratosphere

This chain of events sent Rob GEE sailing into The Gabber Stratosphere. This momentum continued through 1996 when ID&T released “Ecstasy, You Got What I Need”, a deviation from the typical gabber sound at the time, which made its way into The Dutch Pop Charts. While artists during this time were obliged to create “radio versions” of their music with weaker kick drums, Rob GEE kept it hard with his trademark distorted 909. The hit track “You Got What I Need” held The #1 Position on The BOX for 13 Weeks in a row surpassing pop stars such as Celine Dion, Spice Girls & Michael Jackson. Rob GEE’s history of breaking barriers did not stop there.

Let’s fast forward to 2006 and the infamous “Sensation Black” incident. Rob GEE and his “Super Band” made up of members of Slipknot, Biohazard and others took to the stage fusing Metal & Hardcore to show we are 1 Gabber Family to a Hardstyle Crowd, but this time there was definitely a division. Some loved it, others hated it. Furthermore, one person hated it so much that he climbed onto stage and attacked Rob GEE, but let’s just say that was handled “Jersey Style”.

One thing has always stayed true. Rob GEE’s open mind and eclectic taste in music has always and will always set him apart from the rest. He does not believe in these “boxes” that divide us; especially in The Gabber Scene. If you listen to Rob GEE’s new single; the message is clear, we are in fact “1 Gabber Family”.

The new track is available now across all platforms. The track was most recently played on Kutski’s Keeping the Rave Alive podcast.