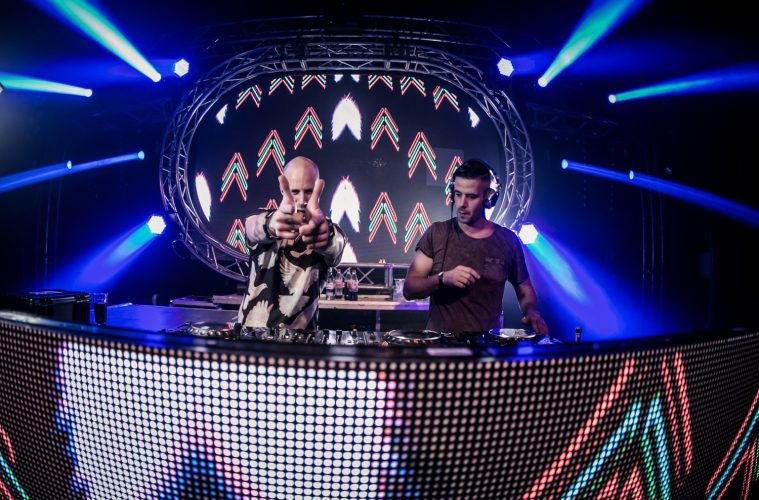 Hamburg was on fire last Friday because of the highly successful Gunz for Hire Germany tour. One of the highlights was the b2b (back to back) set by Ran-D and Adaro, which work so well together. They brought raw style back to Germany and left with a big bang.

2014 was a great year for both of them and starting with such an overwhelming set, they proved that nothing can stop them in 2015. We had the chance to catch up with them about their upcoming projects and big surprises for 2015.

Your first gigs in 2015, so what can we expect from you Ran-D?
Ran-D: I have a new EP ready with four new tracks. Three are already previewed ‘I’m Legion’, ‘Wolfchild’, ‘FCK EDM’ and I have a new one that’s called ‘Firestarter’, which is almost finished. I’m also making a collab with Phuture Noize as well.


‘FCK EDM’ went through all social networks since its first appearance at Qlimax 2014. One of the most wanted tracks for the first quarter.

Can you give us a release date for the EP?
Ran-D: We are working on a new label together with some friends and I think we are almost ready to announce it ;).

What is the name of the label?
Ran-D: Yeah, the name is so secret we can’t tell you right now.
Adaro: It’s ‘Still secrete records’

First of all great new haircut Adaro.
Adaro: Thanks!
Ran-D: What about my hair?
Adaro: I wanted the same haircut like him, but I was not sure.
(Everybody laughs)

What can we expect from you Adaro, after the long break you had?
Adaro: I was out for like six or seven months and then I started again with some new tracks. When the new label is ready ‘RaggaMuffin’, which is also featured in the last Digital Punk – Unleashed and my feat. with Rob Gee ‘Dark Universe’ will be released, that I played at Freaqshow for the first time.

You are playing in Germany again. How is the German crowd compared to others?
Ran-D: I think it’s really hard to compare crowds, but what I always see is that the German crowd is very thankful. The atmosphere is always good and there’s a lot of dedication. For example, everybody is waiting in line when we take pictures – it’s very neat.  And when it comes to partying you know, when we clap everybody claps along. People know all your tracks and that makes it really cool to play here.
Adaro: I would say in Germany a lot of people really live for hardstyle!

That’s for sure! Can you name three words to describe the Gunz for Hire Germany Tour!
Both: Dedication, Raw and Energetic. Yeah, that are cool words!

Thanks for your time. Now we can be pretty sure that 2015 will count for you!