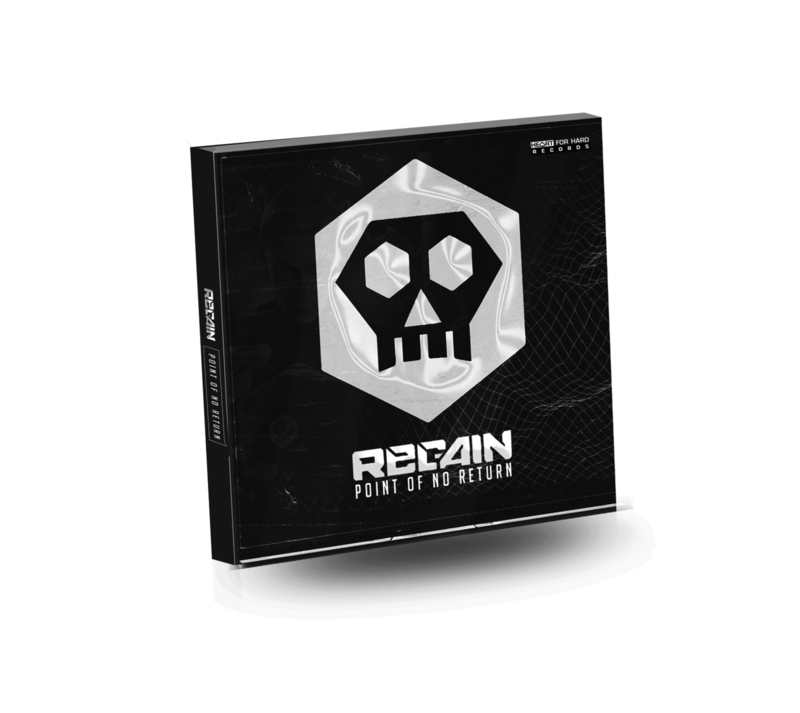 Regain – Point of No Return

A huge red cross marked the 28th of January in our calendar. This day was the point of no return. Many hardstyle lovers waited for this to come. Regain presents not only his album, he also presents all the tracks live at his event in Time-Out, Gemert. Regain – Point Of No Return

In this article we will talk about this magnificent album from a producer who know how to create music without even using the best hard- and software available. Yes, he still produces at home, at a computer and just a MIDI-keyboard. It’s already unbelievable right? Besides the review, we have also met with Regain for a small interview about his album and the event, which will be published soon! Pawel Goss did rise fast, and now we are here at his ‘Point of no return’. Face his music, Face REGAIN!

A few months ago we saw a promising trailer, which was really epic! It was almost a movie. In a haunted house Regain enters as some kind of black magician, with a black token in his hand. Regain is preparing his ritual. Which will result in his album. The trailer did catch many attentions. The album was really hyped for a long time. There are many albums released in 2015/2016 but this one had a really strong marketing. Which results in an amazing album.

In this section we will talk about the tracks on the album ‘Point of no return’. We will not go in-depth on all of the tracks. We made a small selection of 8 tracks.

When you load the album of Regain in your sound system you expect some heavy kicks and heavy screeches. What you probably don’t expect is a 2005-2010 Hardstyle sound with reversed kick style, melodic atmospheres and powerful melodies. But guess what? That’s what you get in this track. Starting with a short techy kick of the early sounds, building up towards an extremely powerful melody which could also suit a documentary about the beautiful species on our planet. Dying Light is one the most unexpected tracks of the album. It gives you some summer vibes, prepares you for the festival season. For sure check this one out, but since it’s track one on the album I’ll bet you do!

This track has the same vibe we are used to. It reminds us of tracks like ‘About Me’ and ‘For the Streets’. The best thing about this track are the ‘bitchy monotonous vocals, which are to be guided you trough the track. The anti climax in the end will make the crowd go insane for sure!

Some of you might remember this track from Radical Redemption – The One Man Army. This was the opening track of Regain’s set. Everybody was wondering who made this masterpiece. Of course.. It’s Regain himself. Starting with some Melbourne shuffling and techno beats, mid intro that brings you back to a scary circus, and the climax that pops the melody with a rough beat behind it! Damn, this track is so wicked. You have to check it out!

‘I give you one shot, one opportunity!’ – Mc Renegade. These are the powerful words of the track One Shot by Regain & The Machine ft. MC Renegade. Directly after that a heavy screech drive will blast through your speakers. Quite rough for an intro? Well, this is when you put Regain and The Machine in the studio. In the mid intro you will face some lovely breakbeats, in between some synth sounds. The build up is powerful hammering trough your speakers, and then the climax blasts like a nuclear bomb trough your speakers. The heavy screech finding its way trough the bassline, crispy and nasty.

The laser like sounding screeches within this collaboration with Kronos are one of a kind. The first climax has a nice drive, like we are used to from Regain’s tracks. The mid intro sounds perfectly combined with the style of Kronos. The second climax is again an anti climax. This time there are some heavy kicks assisted by a long screech, the breakdown of this anti climax switches into the melodic climax. A short track, but still a great one to play!

Who remembers the Warchief and ‘Chainsaw’? Who remembers ‘About Me?’ Guess what, when you combine these styles? Then you get No Survivors! A track with heavy screech drives, no survivors, brutal vocals, chaotic climaxes and a scary uplifting atmosphere. We especially like the part at 2:40.. After the word ‘Death’ a rough climax pound through the speakers. Imagine this at a grand event with a huge sound system!

At the end of the album we will spot two hardcore based tracks. The first one is Industrial Revolution together with Dither. We often see RAW combined with Industrial lately. In our opinion, this is a fantastic combination. Both styles assist eachoter well. The breakbeats with the hi-hats and the snares are perfectly fitting the heavy kicks and screeches from the RAW. That’s what you get when you play Industrial Revolution, a wicked combination of two brutal styles.

Regain and I:GOR, two polish friends combined their arsenal of musical productions. This results into Reptilians. A freaking heavy track, assisted by Polish vocals, which are funny, but also brutal and perfectly fitting this brotherhood. The crunchy I:GOR geek seems to melted with the deep Regain kick. On top of it there is currently a screech, hi-hat or snare pounding on the same rhythm. From 2:40 a typical I:GOR sound pans from the left to the right, screeching trough your veins like a chainsaw. It’s so awful that it sounds so damn good! This track is one of the craziest tracks and perfect to end a set or an event in style!

For every Hardstyle fanatic, this album is a true must-have. This album will take you through a journey from hardstyle to raw and even some hardcore. The vision of Regain exposed in 17 tracks. For us this is one of the best hardstyle albums so far. Regain paid so much attention to the tracks and the right placing order. It feels like a solid ride with great track pieces by piece. Together, these tracks, create the ‘almost’ perfect album, so you know what to do: Get your copy now!