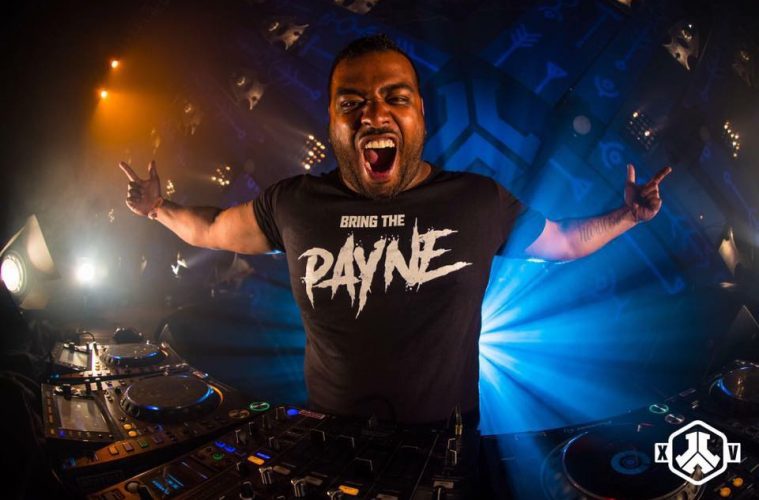 Proud father and one of the wildest Hardstyle artists across the scene. At the one moment, he performs an ultra-hard rawstyle set and at the next you see him disguised as a ballerina in the backstage area – meet Jason Payne. A DJ and producer with maybe the cheekiest and broadest grin you will maybe ever see – signed to the Wishlist Agency – has now announced his very first album. Hardstyle Mag met him for an interview and read now why he loves Major Lazer

Hey Jason, nice to meet you finally. We are really curious about what you are going to tell us 😉

Hi Hardstyle Mag! First of all, thank you guys for this interview! I’m really happy to share my ideas 😀

So lets start with the very first question. What is the idea behind – Jason Payne’s album?

The idea to make the album was born around the beginning of last year when I started my own label Break The Rules. I have always wanted to make an album, but I wanted to make sure my production skills were up to scratch first. Over the last year, I’ve been working hard to find my sound and now I know this is who I am as an artist. The album is called ‘Watch Me’ because this is the beginning of a new era for me. One where I’m not only doing heavy damage on stage, but also in my tracks!

Ok, sounds really nice. Curious about what we can expect from it?

I’ve always been a fan of every type of Hard Dance. Fans know that I love to play Hardstyle, Rawstyle and Hardcore in my sets and I wanted my album to reflect that. The album is a buildup from more Euforic Hardstyle to Uptempo, all with that new Jason Payne twist 😉

You already played at several big festivals, you are running your own music label and now the album. What’s next?

For Break The Rules, now is the time to find more likeminded artists who want to join the label and grow a crew! As for Jason Payne, I want to keep bringing my sound to the biggest festivals around the world and get to know the crowd in countries I haven’t played before

It seems that you have been a bit under the radar lately, will we now see more from Jason Payne again?

Hell yeah! The album is done, but I’m already working on new music! I can’t wait to let you guys hear what I’ve got planned!

Great, so after Jason Payne launched his album – what are your plans for 2020?

Make a lot of new music, play at a lot of parties and get to know a lot of awesome new people!

A maybe more personal question – I am wondering how the name “Jason Payne” was developed?

Haha… my real name is Sanjay and when I was on a roadtrip through Europe with some friends a long time ago, I got annoyed because I had to explain my name to other tourists all the time. I changed San – Jay to Jay – San and that became Jason (so it’s still easy to remember for me when I’m drunk :P) Payne is a last name one of my friends came up with on the roadtrip!

Fingers, crossed now! I am a big fan of “Three the Hard Way” – will they ever come back?

If I remember correctly, you are a smoker. Thus, are there any bad habbits you try to get rid off?

Too many! I love to eat a lot and smoke a lot, but it would be way better for my health to keep that in check a little more.

For the people on the dancefloor, it always looks like, everything on stage works out perfectly. But honestly, is there a certain moment you remember when something went wrong?

Also too many times haha! Once I had a big speaker land on my leg, which hurt like hell, and last year I ripped open my arm on a sharp edge of the stage! I still have the scars, but I like to think of them as reminders of the cool things I get to do 😀

Outch! So more like a worrier. From the musical perspective – is there currently an artist you would love to collab with?

The answer to this question changes every time for me, but right now I think it would be Major Lazer! I love their vibe!

True, the music really cool. But from a more personal perspective, if you would describe yourself as an animal – what would it be? and why

A tiger! Ambitious, but sometimes also a little lazy 😛

Haha or more like a house tiger? If a fairy would grant you one wish – what kind of a wish would a Jason Payne make?

To get more wishes 😉

Sounds logic. So now, before we leave – is there a message you would like to send out to your fans now?

Thank you guys for being at my shows! Your support means the world to me, and I can’t wait to show you more of what I’ve got planned! The album is already 50% soldout, so if you didn’t get it yet, hop on over to www.breaktherulesrecords.com!

Thanks, Jason Payne for being with us and spending your time. We wish you all the best – a big success with – Jason Payne the album – and hope to see you soon.

I hope to see you soon, let’s have a beer together!