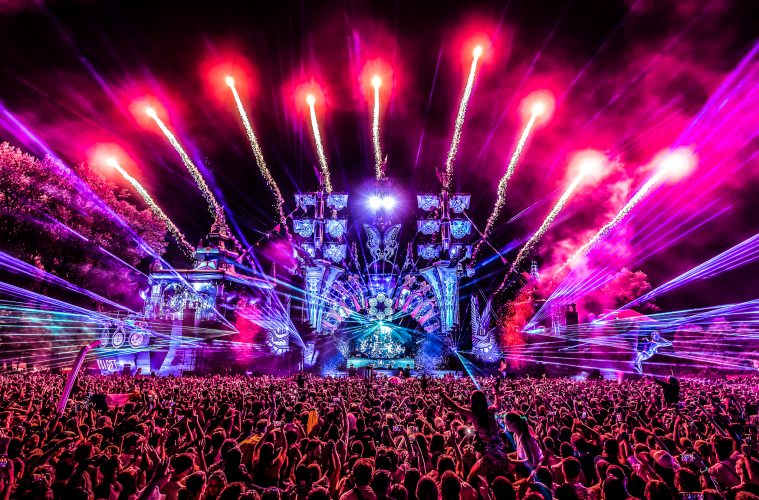 Mysteryland took place from August 26th to August 28th in Haarlemmermeer in the Netherlands. After a two year hiatus as a result of the pandemic, Mysteryland came back this year with more than 300 artists spanning across 22 stages for three days of incredible art installations, intricate stage designs, and out of this world visuals.

*All photos were provided by the Media Nanny

Mysteryland was held this year at Haarlemmermeerse Bos, a massive park located in the outskirts of Amsterdam. What sets this venue apart from the countless of other festival sites in the Netherlands is that the park is a polder spanning over various hills and lakes. For those unfamiliar with the Netherlands, most of the country is flat. By contrast, in the very center of the park is an enormous hill (the perfect spot for watching the fireworks during the end show!). Despite the colossal size of the venue, no stone was left unturned when it came to the decorations and art installations. Around every corner there was something to feast your eyes upon. From rainbow tunnels to bars with swings for seats, a psychedelic farm, a roller-skating rink, the attention to detail and the aesthetics were remarkable.

Mysteryland’s campsite is essentially a party of its own. With a stage, multiple food trucks, games, a pool, wellness area, a “living room” chill out area, there was something for everyone. The center point of the campsite “The Hangout” was constructed from a myriad of colorful shipping containers.

What sets the Mysteryland camping experience from other festivals is the fact that on Friday there were five stages to choose from with a wide selection of genres of music. At other weekend festivals I’ve attended you usually only had the choice of two to three pre-party stages, so this was really a treat.

After the night came to an end it was shockingly quiet at the campsite. In my over 11 years of attending festivals all over the world this was the first time that the campsite was quiet once the after parties ended. There were of course people still enjoying some drinks or chatting outside, but you didn’t hear music blasting from portable speakers into the wee hours of the morning (or even worse from people’s cell phones). The campsite experience was extremely comfortable and well organized. Staff was readily available to answer any questions and assist campers to ensure everyone had a safe and fun experience.

With 90+ food trucks onsite, I couldn’t pass up the opportunity to check them out although trying all of them was impossible (unfortunately!). All the food I did eat throughout the weekend was extremely delicious. Conventionally at festivals the options are limited, but at Mysteryland they had food from all over the world.

My favorite meals of the weekend were the steak sandwich with truffle mayonnaise and the traditional Dutch patat met mayo (fries with mayonnaise) at the campsite and Ukrainian food inside the festival. At the Ukrainian food truck, I tried varenyky (potato dumplings) and deruny (potato pancakes). Both were delicious, I’m pretty sure it was a portion for two, but I devoured all of it and could have probably eaten more as well it was that good. All the proceeds from the Ukrainian food truck were donated to the Humanitarian Coordination Headquarters of the Odesa Region.

Each of the 22 stages had a unique design and distinctive vibe. As we cannot go in depth into every stage, here are some highlights.

The mainstage was what Noah’s Arc would have looked like if it was designed by ravers. The giant ship was adorned with ornate and intricate details. At the center of the stage was a face surrounded by flowers, ship sails, and a giant butterfly to top it all off.

The Q-dance stage was a giant buck with large antlers and what looked to be flames coming out of the back. At night this friendly deer turned into a demon one with fire, insane lasers, and of course fireworks.

The Cocoon stage was the place to be for house and techno. This stage had bohemian vibes and lit up the forest around it at night.

Trance Energy was the home of the biggest names in trance over the weekend. This stage was a giant hangar making it the ideal place to surround yourself in fog, lasers, and amazing vibes.

As for the visuals throughout the weekend the most memorable were the ceiling galaxy display at Get Whack during Rejecta’s set on Friday night and the very intense (albeit somewhat scary) firepits of hell during The Satan’s set Sunday at Thunderdome. Along with this, walking through the festival at night, the trees were lit up in vibrant pink and purple hues illuminating the paths and creating a majestic aurora that makes Mysteryland such a special and unique festival.

The vibes and energy at Mysteryland were out of this world. After two years without Mysteryland you could feel the energy and excitement of the partygoers who were ecstatic to be back on the sacred grounds once again. Mysteryland’s tagline “Today is a gift” really lends itself to this concept, as in the current world we live in we can’t take anything for granted anymore and truly need to relish in the moment.

The staff throughout the festival was extremely attentive and knowledgeable. As the festival is so massive there could be more signage and staff instructing people where to go. It was very easy to get lost in such a large venue especially in the evening. Having lights around more of the signs would be helpful as well.

Unlike previous camping weekend festivals I’ve attended, the bathrooms at Mysteryland were overall quite clean. There was consistent staff restocking the toilet paper and cleaning the bathrooms. The best part was rather than the traditional porta-potty they were real bathrooms with lights. You were also able to flush the toilet with a foot button, making it more hygienic. Due to the size and large attendance of the festival (more than 130,000 visitors) there were oftentimes long lines for the bathrooms or very long stretches of walking in between the bathrooms.

On Saturday afternoon there was a period where it was very difficult to find water. Multiple water refill stations were empty in addition to the sinks by the bathrooms. Thankfully water was still available for purchase at the bar but for those in search of (or need of) free fast water, it was difficult to come by. In this instance having back up jugs or back up bottles of water at the stations would be handy especially for safety purposes.

The festival was overall very clean, there were very few plastic cups or trash on the floor. This is namely because of the Never Give Up on Your Cup program. Guests were encouraged to trade in their cup at the bar of with someone from the Green Team, in exchange for which they received a recycle token. Visitors that didn’t have either a used cup or recycle token had to pay half a token extra for their next drink.. Throughout the weekend guests would return to the bar with stacks of cups, bottles, or cans. This initiative led to a very clean and sustainable festival.

Furthermore, almost all the decorations were made from recycled materials or re-used completely. Mysteryland truly took sustainability to the next level in all aspects of the festival experience.

As previously mentioned, with a line up stacked with over 300 artists we certainly could not cover it all. Moreover, as this is Hardstyle Mag our focus was predominantly on the harder styles artists. However, that’s not to say we didn’t get groovy to some house or sing our hearts out to trance.

As the Prophet recently announced his upcoming retirement from hardstyle. After more than 35 years of producing music, this set was a must-see. Seamlessly blending classics with newer bangers like Caramba and Timemachine coupled with mosh pits and fire it was a great way to start off the weekend. The end of the set was particularly emotional as MC Villian expressed his gratitude towards the Prophet for his contributions to the hard dance scene. The Prophet is without a doubt a legend that will certainly be missed.

Rejecta threw down a wild Rawstyle set on Friday night. With bangers like Hard Jams, Road Rage, and Rise of Rejecta we only had one choice but to kick roll our hands in the hair in a vortex of confetti.

Adaro had us singing (and screaming) to classics such as L’Amour Toujours, and Cry for You. To top it all off, he dropped the track Before You Go, as a tribute to MYST who recently retired. This set was an entertaining and eclectic combination of Rawstyle tracks and classic rave favorites.

On Saturday the crowd for Sound Rush was so packed that the sea of people surpassed the floor surrounding the stage and traversed all the way up the mountain. The best part of this set was watching and listening to the entire crowd sing Country Roads. As an American, I heard many of nights closing at the bar to everyone singing this song and to hear it as a hardstyle remix at Mysteryland was really a sight to see.

Nosferatu laid down a high energy set with the one and only MC Mouth of Madness captivating the audience and waking everyone up on day two. When Nosferatu dropped Still Nr. 1 chaos erupted in the crowd with shouting, stomping, and singing.

Hands down one of the best sets of the weekend, Ben Nicky is the perfect combination of hard dance and trance. With tracks like We Come 1, Castles in the Sky, Rapture, For an Angel, and Hey Britney. Every track was my favorite basically from start to finish.

Outsiders kicked off their set with a tribute to the essential workers during the pandemic, 1 Team. He then hit us with some remixes of traditional Dutch songs and everyone’s favorite Helicopter. Thousands of people in the crowd (and on the mountain) waving their shirts in the air. I got hit in the face a few times, but it was worth it!

To close off an epic weekend, Partyraiser took the Q-Dance stage as the final set before the end show. We sat on the top of the hill as laser beams engulfed the crowd, flames shot through the sky, and fog created an endless sea below us. One of my favorite moments of the set was when he dropped the remix of Wake Me Up as a tribute to the legendary Avicii. Not only was that emotional but Partyraiser’s heartfelt Sound Becomes One brought a powerful end to the weekend.

Finally, the end show lit up the sky with a theatrical firework display and synchronized lasers. It was full 360 degrees of sensory overload and the perfect end to the perfect weekend.

All in all, Mysteryland is a festival unlike no other. It truly is more than just a music festival; it is a total immersive artistic experience. While at the festival you are taken to another dimension. The attention to detail in the decoration and stage design is unlike anything I’ve ever seen before. 100% recommend this festival and can’t wait until next year!