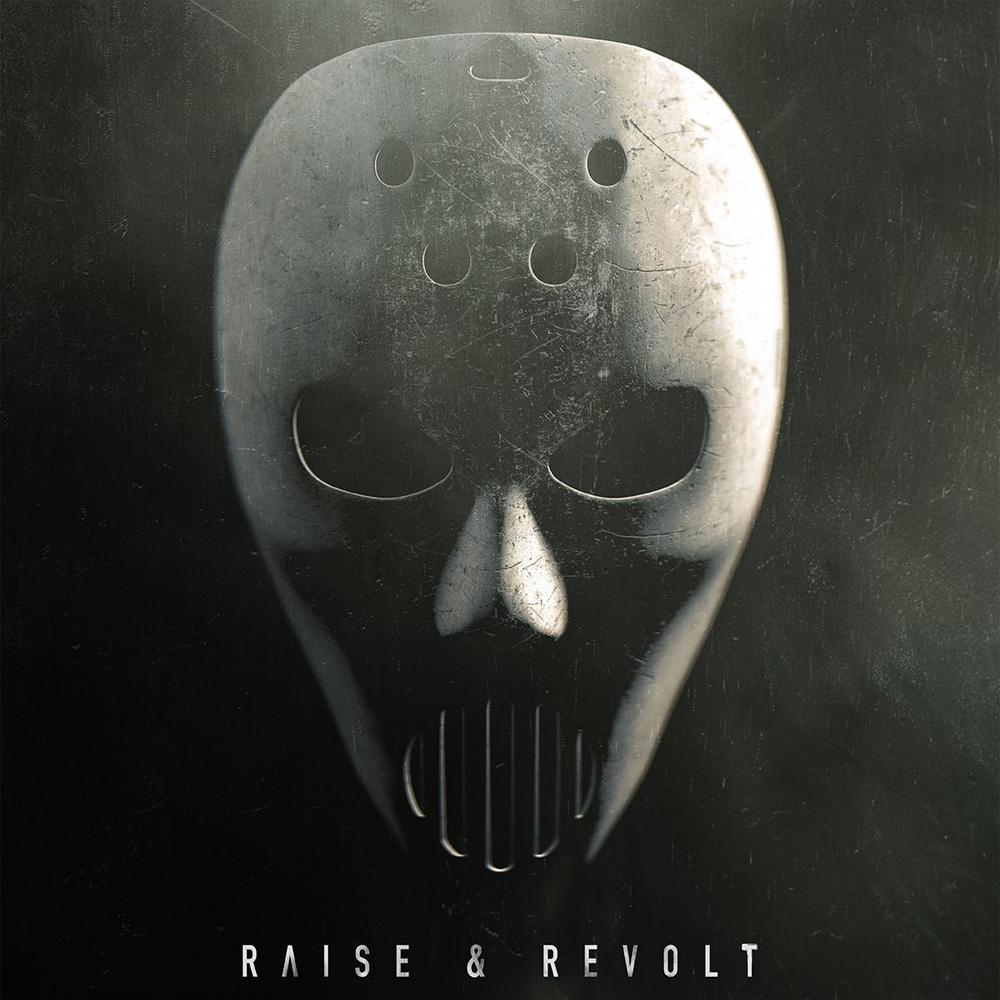 At the end of November Angerfist did strike again, not only with an awesome event, but also with a complete new album. Since we already reviewed the event, it is time to cast a glimpse at the album. Let us turn up the volume! Raise & Revolt!

All of them are improved in sound quality. A perfectly mixed CD for all the new poeple in the scene, but also for the older generation. But first let’s have a look at the tracks on CD 1.

THE GAME IS MINE’ – and yes the game is his. The typical Angerfist track, with its specific feeling. The lyrics are great, the piano melody, that builds up to the great climax is stunning and strike trough your nerves. These are aspects that make Angerfist such unique a producer.

After producing ‘Dark Angel’, a track that is used by Angerfist during many sets, Thorax got the opportunity to remix ‘Angerfist – Conspiracy’. The lead towards the climax is brilliant. It reminds me of the Dark Angel sound. Thorax and Angerfist truly set the place on fire.

The anthem of the album and event. The intro sounds a bit like RAW Hardstyle. Later on, the track will reach higher BPM’s and pop into a great hardcore track. You definitely have to listen to this track a few times. The track will get better after a few times. I like the sounds and drive right before the last drop. Awesome anthem and worth the event.

Afraid of Me (with Dyprax)

The track starts with some dark vocals. Then a typical Angerfist piano-melody drops in, followed by a harder intro with some synths on it. The build up towards the climax will put you into charge mode; ATTACK! This track is awesome. Dyprax is also doing a great job lately with his new tracks. A deserved spot at this album and the event.

They come around, but they never come close to! BAM! And off we go. I like the vocals in this track, it gives you that right anger feeling. The kicking part has a good vibe and drive. A lovely piano sound, cracking down the hard kick. This one is really dreamy, but it sounds perfect while assisted by the kicks. The high sounds sweep from left to right. You will love this for sure!

This track is different from all the other tracks. The bass is very rough and deep. The intro has some dubstep influences. As the name suggest, there is allot of percussion in this track. You can really hear the Radical sound in this one. Somehow this track does not give me a warm feeling. The track is very original with its kick, the snares and the DnB breaks. It’s worth checking!

Wow! What a kick, this one is truly awesome. I love the vocals in this track. Let’s ‘Fight with Anger!’. The vocals remind me of ‘Voice of Mayhem’, because the style equals this one. The sound is squeezing through your speakers, it’s amazing. When you listen to this track via headphones you even witness it better! The melodies are great, but not that special, it is like I’ve heard it before. The kick and vocals make this a great track.

Masters of the great conspiracy (With Radical Redemption)

This track starts with a normal hardcore intro. Then the lyrics will introduce themselves. ‘ENSLAVE’, ‘CONSPIRACY’, hearing these lyrics you know what’s going to happen. It’s time for some musical violence! The kick strikes and the awesome melody will take you away. Great tune!

Together with the dark voice in the background, this track gets unforgettable. Your legs start kicking, you’re ready for that delicious drop, and yes, there it is! WORLD DOMINATION! The first drop is assisted by a melody, the second by a hard and rough one, and the third drop is a drop with a massive bass, so elan back and enjoy the massage. The kick rolls, clearly by Radical, are nicely assisted by the melody of Angerfist – perfect combination!

Perfect Fury (The Outside Agency Remix)

Want some industrial? We needed a few times until we started to like this track, give it a try. It does sound more like a DJ Tool track to me. It will be a good track to mix between a few melodious tracks for sure! The track will somehow never reach a peak or a climax. That’s what I miss in this track.

Hurricane for my Brain (With Negative A)

Hell Yeah! This track is a real hurricane for the brain! The track starts directly with a rough part. I like the high tempo in this track. Halfway the track, a nice, high sound will blast trough the speakers. It’s like a saw which cuts through metal. We love it!

Angerfist & Negative A - Hurricane For My Brain

A lot of DnB parts in this track and If you like that sound, definitely check this track. I love the intro towards the second drop. But overall this track is not my favourite. The melodies and the kick are a bit boring and uninspired.

LET’S DO THIS!’ is how the track will introduce itself. The track starts directly at a high tempo. During the track, the BPM will reach a higher level. The sound is really brutal. I really like the tempo in this track. After 2:30 the chords change to a higher chord. Wow! This one gave me Goosebumps. There is no time to sit back, this track really exhausts you during an event! In addition, this original track retains the Angerfist sound, not only in sounddesign but also quality sided. Live this track was beyond amazing!

Blast at you (With Crossfiyah)

The track starts rough. Blasting your senses from the start. Let’s f#cking go! You can clearly hear some dubstep influences in this track, including some break beats. The lyrics consist of a nice rap part. From far away you hear the melody pumping towards its climax. This track will blast through your speakers just like we want an Angerfist track to be.

This track will make ‘you lose yo calm, bitch!’ The track is uptempo and really rough. I like the vocals that are on repeat during the whole intro. After the intro, a nice dark cracking piano sound drops in. This sound is really awesome! The evil melodies will last until the end of the track. There is no time to rest in this track. One of my favourites from the album!

Angerfist meets the king of Frenchcore, Dr Peacock. If you like Frenchcore, you will really love this one. Even I, not the biggest Frenchcore fan out there, do like this track. Sadly during the long main part, the track slightly loses tempo and its drive. It somehow feels like it does not fit the album or fits other tracks from the album. Anyway to go crazy like a electric eel it’s perfect, I guess!

CD 2 is a mixed CD, containing 39 tracks. Many of these tracks already released on other albums or as solo tracks. So you won’t hear any new tracks during this mix. But the quality of the sound design of this tracks is improved very well. Tracks like; Take U Back (Original mix), Bad Attitude, Knock Knock, Riotstarter, Radical (Dominator Anthem), Wake Up Fucked Up, Yes (Drokz Remix), Inframan and Messing with the wrong man will make your eardrums vibrate.

It is a nice mix CD to play while you are driving, make your homework, chill with friends, but it’s not that special. Some tracks are only played for 1 minute, others 3:30, it is a fast ride through Angerfists history.

The album has a dark design, a nice design just like the Radical Redemption – The One Man Army CD. I like the way that the mask is shown. It looks really evil. Both CDs have a print on it. There is also a booklet inside the album. The information in this booklet is not that special. A small introduction story and you’ll find the tracklist. After all, I like the design and the dark tones, which really gives this album a good look!

Angerfist continues his own saga, by bringing us a next level event and album. Does it exceed the Deadfaced Dimension? No, it doesn’t. But should it? No! It’s more of the same, but the quality of his productions is high as always. He definitely found his style and this is what we love. The instant reaction when an Angerfist track comes up!