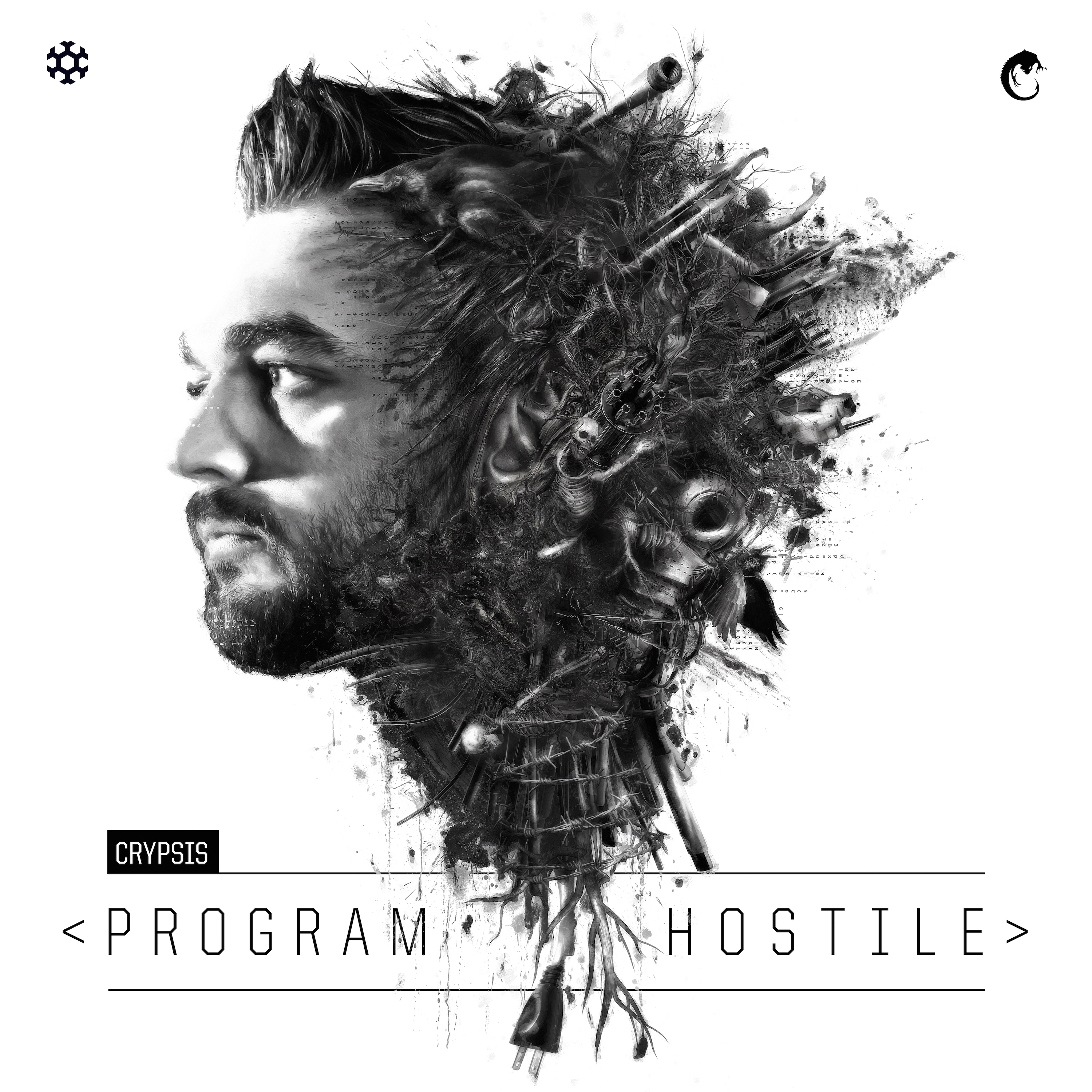 Album Design
This album is claiming the throne when we talk about album designs. Graphic Designer Rick Oomkens did create a stunning piece of art. At the front of the cover we see Crypsis. His head transforms at the backside into a detailed artwork. A creepy but emotionally and fascinating creation. What fits perfectly with the music of Crypsis. We spot a skeleton, some guns, a tank loop and barbed wire. Is this about the struggles in Crypsis life, his progression, his way of work? Directly our fantasy is pretty incentive while seeing this creation. When we open the album, we get lost in the forest, Crypsis brain, his creation, his creative spirit. It is filled with branches, bombs, dark rituals, carcasses, and weapons. All in the same style as the cover. Inside the booklet, we find a same piece of art with the logo of Crypsis, his effigy that is showing his the king of the dark forest. It all sounds very dark and dangerous, but it also gives a tremendous atmosphere contributed to the album, we are hungry to play the songs. Let’s do it!

Track 01 – The Cities Fall
This is the opening track of the album. Dark vocals guide you into the album. The atmosphere is there. Guiding you to the second track.

Track 02 – Program Hostile
Program Hostile is the title track of the album. This title track is assisted with vocals by MC Nolz. The track is very rhythmic and is down to earth. It sounds like hardstyle created a few years ago but then in a 2016 jacket, new sounds designs, and improved music quality. This track is a slow starter but after a few times, you will enjoy it. It will be a great track for the DJ’s because it’s a great track for mixing and remixing. The track represents the album, starting slowly building towards a rougher ending.

Track 05 – Revelation
This is one of our personal favorites, and a must check for all hardstyle lovers. Using the vocals of ‘the see-er’ from the History channel series Vikings and choir sounds, it directly gets a dark but holy atmosphere. A vibe that suits Crypsis perfectly

This track starts with a powerful interlude. After the first vocals you will hear climax melodies fading in, a surprising and uplifting, drum and bass-minded, a technical switch will transform this interlude into a drop with hard pounding kicks and rhythmic structure with distorted sounds. This track blends different musical spectrums. You can hear aspects from different genres like drum and bass, techno and hardstyle.

Track 06 – Legs in the air (with Adaro)
This track is built in the rhythm that suits Crypsis the most, but it’s flavored with Adaro’s musical style all over the place, which makes it a great track to listen too. It is very bouncy, rhythmic, uplifting and filled with awesome sound effects. A great track to entertain the audience and literally kick their legs in the air, hehe.

Track 08 – Bathe in Blood (with Radical Redemption)
One of our favorite collaborations on the Program Hostile album is track 08, named Bathe in Blood, produced together with Radical Redemption. Collaborations are all bout blending two sounds into one, one track. This track is definitely combining the two styles. The melody is very minor, which suits the Crypsis way of thinking. The squeezy layered sounds on top of them are Radicals signature, as are the vocals, and the kick rolls. The kicks of both are used in this track which makes it a pleasant journey listening to.

Track 10 – Punish
Maybe you can remember this track from the trailer of Supremacy. Even if you don’t, check out this banger! This track is full of emotion and beautiful melodies. Even though the melodies sound a bit sad, because of the minor chords, it is really uplifting and powerful! This is a perfect example of the Crypsis sounds, if you ever have to introduce somebody with the Hardstyle and Crypsis sound, you know which song to pick! Punish is not a punishment for your ears, we would call it a privilege!

Track 11 – Break Down Low (Brennan Heart Remix)
For us, this is the only track we dislike from the album, not because it’s a very bad track, but it’s a bit misplaced at this album. There is a build up from track 1 till 18. Starting with some slower tracks, ending with hardcore. But this Break Down Low remix by Brennan Heart doesn’t fit in this image. It’s also the only track which is really euphoric minded, with reversed basses and empty hall kicks. As mentioned above we think it would fit better as a bonus track at the end of the album.

Track 13 – Smacking Heads
This track has a typical old school early hardstyle atmosphere. Crypsis did an amazing job again. Using a chorus sound as piano sound combined with a female vocalist / rapping sample it creates an uplifting vibe. We also like the vibration of deep bass when the drop ends, that’s showing your skills and what producing is about!

Track 14 – Torture (With Luna, Frequencerz Remix)
This Torture remix by Frequencerz is definitely a must hear. Mostly you compare a remix with the original. The difference is that this is more like a Torture 2.0. Massive Kick-rolls, from raw style nowadays, combined with the old school, early hardstyle sound by the original track. The remix is still very similar in rhythm and vocals, but the sound design improved incredibly.

Track 18 – Kill for the Thrill (with Unexist & Satronica)
The final track on the album is Kill for the Thrill by Crypsis with Unexist & MC Satronica). Unexist did use the vocals of Satronica a few times earlier, it’s a very original vocalist. Not the deep dark and low vocals, no, Satronica has a higher voice but can also scream and shout and give a heavy metal vibe. Which is not strange since he is the vocalist of an American Metal Band. This track has a perfect vibe and combines raw and hardcore into one. Crypsis known for is amazing atmospheres and melodies, Unexist known for his brutal and perfect mastered kicks. Just remember these words to scream along; Murder, Murder, Murder, Kill, Kill, Kill, Blood will be spilled, Just for the thrill!

Conclusion
Crypsis stayed true to his roots. There are rhythmic structures, early rave sounds, epic melodies, and a bit of a techno vibe. It is more of an upgrade than changing a style completely, which is a good thing. He insanely improved his production skills, we can’t wait to hear these tracks mixed by one of the better DJ’s in the scene. Crypsis did deliver an amazing masterpiece. We can’t wait to hear these bangers at the dancefloor. The third album will uplift the career of Crypsis, after a period of production silence. The album design is amazing and perfectly fits with the vision and the atmosphere of the tracks. We recommend you to buy this album now!