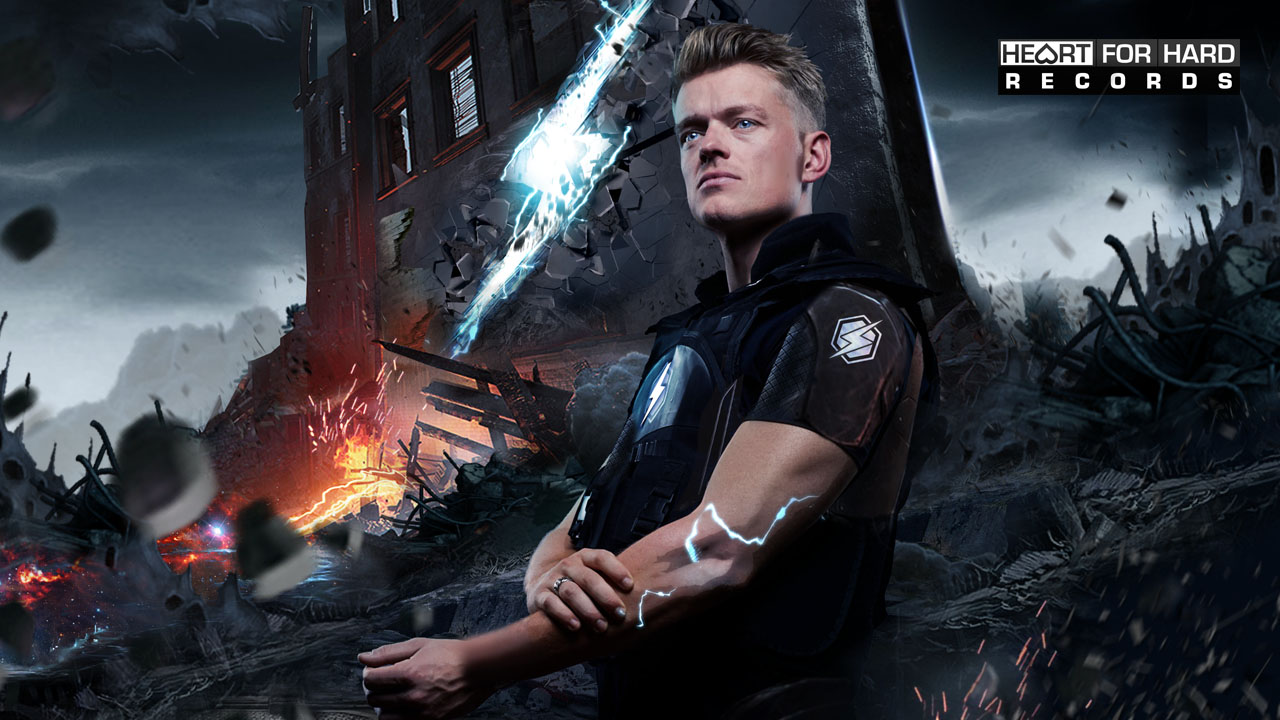 Known for his devastating tracks like Bodyshock, Supersonic Superstar, Ultimate Bassdrop or the extremely hyped track: Pinsir, Neroz has rapidly become a major player of the known Heart for Hard label. He fostered his success by launching his live act “Shock Sequence” supported by mind-blowing tracks like Bodyshock, Mindshock and recently his new track Soulshock. His fanbase follows him for his obsession and his musical style characterized by rough energy combined with slight elements of old-school Hardstyle sounds. For 2020 he is ready to take the next step in his career by releasing his debut album “Shock Sequence” [Shoplink]

Hardstyle Mag was granted the opportunity to take a first look what you can expect from this album.

Neroz himself describes this idea for Shock Sequence in own words:

He started this new  chapter in his carreer right after he joined Heart for Hard around 2,5 years ago. A lot has changed since then. In his first year within the label, he was immediately on the move and produced the enourmous hit Pinsir, Distortion (with Insidiouz) and the first Shock Sequence track: Bodyshock. The idea behind Shock Sequence is a follow-up of: Body, Mind and Soul. He enthusiastically tells us more about the concept and the behind “Shock Sequence”. “In that first year I experienced a great change in my career. Since then I was so full of inspiration and ideas and I still am! Body, Mind and Soul have been important for me to find the motivation & inspiration that I needed. This whole project means a lot to me and it is so satisfying to see that it evolved into my first album release.

Lets take a look at the design

The album cover has a basic black theme and the design of the artwork is kept decently but stylish. Heart for Hard themselves are responsible for all the artwork, trailers and 3d work of this album. On the cover we can find the Shock Sequence logo in a very industrial & mechanical look. The inside of the album also contains an image of Neroz in front of a large lightning blast. We asked the designer to shed some light on the choices he made: “Shock Sequence has been a long project since the first live-act in 2017. Since then we always wanted to have this mechanical touch in all of the artworks we made. This symbolizes his music which is the power that activates all the machinery.”

The album itself comprises 2 Discs and a total of 35 tracks (including Extended Mixes). While the first one contains a full continuous mix we can find 17 extended tracks on the second disc. So let’s have a detailed look at the tracks:

A nice vocal intro with fitting male vocals. The lead sounds are strong and directly create an epic buildup to send you on a journey. Around 1:40 with some nice trance sounds that remembers of 90s trance . The drop is not too heavy, but this is the way Neroz usually builds his sets – those build-ups are very important to him.

Scumbag vocal and break – vocals alternating with breaks to prepare the first kick part. The melody is a mixture of trance and modern Hardstyle.  A nice blend to get into the mood and it reminds us of some older Hardstyle tracks in the 2007/2008 era.

A track with melody and a nice anti in the last part of the track. This is also the track that he played at Decibel Outdoor Festival 2019 when he first announced his album.

The vocal intro seems to be about to tell the oldest Grimm brothers tale existing – guess they would be excited by this magic. The starting raw kick gets temporarily replaced by some old-school gated kicks and this fits to the track´s theme. The break and the main part make this an interesting story from start to end.

Eye of the Storm

For a second we thought it was the Terminator theme but only for a second. A threating voice is announcing the demons and with this announcement the lead sounds directly starts to a strong and long kick part. Linking to the title sounds of thunders and storms can be noticed in the background – especially when the catchy melody starts, which is perfect for a dedicated crowd to sing along to.

We all know this track. You must have seen some supersonic kickrolls in particular Facebook groups or online videos at other sources. This track do things by halves. A short intro – vocal naming the tracks title and then the kicks are coming down like bombs. Screeches and an increased intensity create a hard pushing forward raw track. The melody also plays a great role in this track, which gives it a nice & energetic drive.

In your face (with Artifact)

A dark vocal supported lead-in with a solid raw kick marking the raw
scenes current state of the art. A nice touch to this track is that the melody sounds like an electric guitar. The vocals and breaks are on point, kicks are juicy and this is exactly how raw Hardstyle should sound like.

A catchy melody gets interrupted by typical Neroz raw kicks straight in your face. This is the first track that started this sequence. Kick Rollers on the dancefloor will definitely be challenged to follow. “Non Stop Body shock, drop in your mind” are the repeating vocals guiding the buildup to a strong climax that gets interrupted by the beeping of a heart monitor (that the crowd doesn’t miss to shout along with) to unleash the full Neroz Kicks.

A great piano solo directly from the beginning creates the foundation of a strong Hardstyle track with an emotional touch. An alert interrupts to “wake the fuck up” and with the second alert the bold drop starts with a devastating kick. Make sure to protect your ears!

The second title track that is part of the Shock Sequence. The voice warns to prepare for the shock, and yes you better do. Less melodies, synths but bold strong forward pushing kicks right from the start. The first break delivers a dark and evil sounding voice creating the start for the strong build-up, ending in a devastating kick warfare.

Xtra raw lovers will be more than satisfied. Kicks are pushing the whole track forward like a lash the horse. Short interrupting synths creating an aggressive raw bomb with only minor breaks.

Soulshock is the last title track of this album. Neroz recently produced this track and premiered it at Rebellion in November. The words Power and Frequency are exactly describing the kicks and build-ups of this track. It supports an amazing melody which you can also hear in the second drop of the main part.

This is a track that you might have heard since Shockerz in December 2019. The track features a short story of the “Death Knight” that should “Conquer the Darkness”. The dark sinister voice really contributes to this track. We can hear an insane melody guided by Nerozs devastating kicks. The main part makes this one certainly of the heaviest tracks of this album.

A computer voice, computer sounds and touching xylophones elements right from the beginning mark the start of a track that is a complex selection of kicks and bass.

Reloading sounds of a machinegun supported by bold and heavy Kicks with the extra dash of Regain. It’s a f*cking machine gun and this track really hits the point – especially with the epic build-up part in the middle. It also has a fake drop that might put the audience into a state of shock. (pun intended)

This is one of the last tracks of the Shock Sequence album with which Neroz demonstrates that he is able to produce a great uptempo closing track. The high bpm count works really well with the kicks that he made for the track. “Let’s Go!”

The bonus track of the album. It resembles the original Bodyshock a lot, but it features even more aggressive kicks, that fans love.

The album reveals tracks with a surprisingly wide area of musical diversity. Furthermore most of the tracks fit into the typical nowadays raw sound, but Neroz managed to include tracks that rather tend to the good old Hardstyle we know and love. His tracks feature a mixture of trance and mystical elements with a high portion of vocal story parts. Listeners who want to hear a longer version of the track will grab CD 2, while lovers of a complete mix will be happy with CD 1.


The Album can be ordered for EUR 17,99 online here : Shoplink