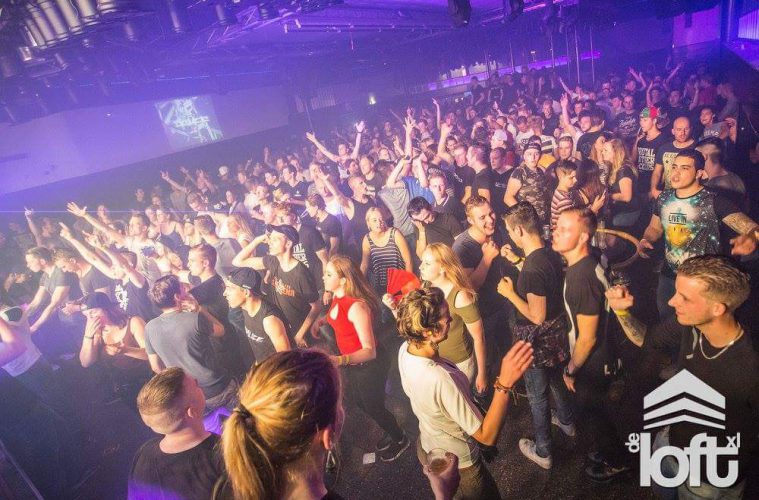 It was spontanious, not really planned, but somehow my mind told me to almost drive 2.5h to Hengelo, just for Rawstyle Nation 2.0! A small party organized by the guys from Rawstylenation, you may know them, as they actually post raw hardstyle music via their different media channels. Starting with upcoming producers to productions by big names, they love all kind of raw hardstyle music. I was curious how their event will be, what Rooler vs. Malice is all about and if they should continue throwing parties!

The location was bigger than expected. As you walked up the stairs from the entrance, you found yourself directly in the main hall, with view on the stage, on the left the first bar, on the right the wardrobe and the toilets. The Loft XL in Hengelo is easy to reach and offers lots of space, bars are surrounding the dancefloor and splitting up the two areas, as well as two higher rooms, on the side and in the back, with a perfect view onto the dancefloor.

I really liked the location, as it delivered this particular underground feeling we all love. The stage was covered in some constructions, with some lights. Behind the DJ they placed a big LED wall. At the roof you found some more lights, even some Co2 FX and on the sides of the DJ both the lasers. The show wasn’t really that spectacular, but it did its job and supported the sets and music. I’ve seen worse in a club!

When talking about music, we should head over to the sets. To start things of, we arrived during DJ Faye, a very young lady, but with a heart for hard! Damn, she already shown the packed place what the night will be all about, by playing Riiho’s latest tracks like Execute or Thyron’s Into the Abyss. She also dropped Brutal 3.0 by Radical Redemption or her very own tracks with Adventum Devastate and Catastrophic.

I would say it was a good opening, but there is space to improve, sometimes she was sadly not on beat while mixing, which needs to be improved. But I’d also say, keep an eye on this girl, as she will hopefully raise to a manifested member within the hardstyle scene, with her own tracks, a fitting label and more bookings!

Next up was Sub Sonik and it was pretty much what you think now – a mix of well know raw hardstyle tracks and his own music. During tracks like Sandstorm, Oh Fortuna, Raise your Fist with Sub Zero Project, who by the way hopped on stage as well during that track, the crowd went wild. He also played some older tracks like To Hell, Look at me Now, Go Fuck Yourself, Go or Outta My Way (Sub Sonik Remix). His set had a nice tempo and prepared the dancing crowd of what was coming next!

Let’s take a look to one the highlights, fuck, I think Delete belongs to one of the best producers and Djs we currently have. Not only his tracks are amazing, the quality is outstanding and you can really listen to all of his latest productions. Second, his performances are full of energy and highly enjoyable. He started just with The Truth and mixed through his latest tracks – just think of Alone, Embrace It, Robots and even Malice and Roolers remix of Mutants. The atmosphere was great, everyone went totally nuts! The fast beaming lights and the overall great sound underlined the damn hard set. He finished his set with Genocide – what else?

Okay, for many people this might have been a premiere, like for us, a few already experienced them at Loudness or Supression. If I shall name DJs and producers who are really hyped at the moment, it’s Malice and Rooler. Rawstylenation brought them to the Netherlands. We expected the most heaviest set we’ve ever heard and some sick hardcore in the end.

Let me tell you one thing – these 1,5h Rooler B2B Malice were one of the hardest in hardstyle I’ve ever experienced. The whole club, the whole house was seriously shaking! By playing all their common tracks like Rooler’s Damnation, Extinguish, Number 23, all common Malice tracks like Aggressive Acts, Xtermination, the Loudness Tool, a new track called Friendzone and probably some other Gearbox tracks or unreleased tracks.

I really need to admit the set was super fun, because I knew the tracks and these hard, laser like, gated kicks gave you such a great energy, especially because Rooler and Malice played at 160 BPM. But I also want to say, that the set build up was not the best. It had no real climax or peak, it was 1,5h straight forward. The drive couldn’t really reach the previous one from Delete. Furthermore, while mixing, they were sometimes not on beat and some transitions just sounded not good.

Ending their set with some hardcore, the last die-hards stood ground against these massive sounds. For the very last time the lights and lasers went crazy, while the last kicks were shattering through the place. Yes, their set was fun, but they also need some more experience on stage I think!

All in all I really liked Rawstylenation 2.0! The vibe was great, the club fucking nice, they really tried to deliver a good show with all the lights, lasers and even Co2. The ticket price was very low and really worth it! The line-up was great, you had enough space on the dancefloor and the sound was good! Do you need more? They got it! Rawstylenation 3.0 is already in its full preparations.