February is such a great month for all hardstyle lovers. Hardbass 2015 was total madness and a hell of a party. The second huge event is of course Reverze! This time Bass Event took us on a journey through history, time and the true path of Illumination.

Reverze is Belgium’s leading indoor hard dance event, taking place in the Sportspalace and Lotto Arena Antwerp, celebrating its 10th anniversary this year. We expected a massive party! The lineup was great and the topic interesting, but did they fulfill all our expectations? Read it now!

Let’s start with the location. Not as big as the Gelredome, but still a great location for such a huge event like Reverze! The Sportspalace Antwerp offered everything you need. A big floor with the main stage in the front, on the sides tribunes and enough seats, if you needed a break. The Lotto Arena is actually a bit smaller, but was built up the same way. Especially the tribunes made it possible to be very close to the artists.

Although, Reverze was sold out and over 20000 people gathered together to celebrate the harder styles in dance music, you still had enough space to dance. And of course you had all the facilities you needed. Bars, food corners or anything else. Furthermore the VIP tribune in the back of both Areas gave you a perfect view of the stage. Except for the locations of the lockers, which were way too crowded after the event ended.

To give you an overview, of what happened that night, we want to go more into detail and have a look at a few sets. Everything began with the short intro show, a deep voice started to tell us the first parts of the story, underlined with a perfectly timed light show!

Going over to Dr. Rude, who had the honor to kindle the fire for the night! He played a nice set and brought the people into the mood. He mixed up different styles, mashed up tracks and brought us a fresh and uplifting set, perfect to start with! It was 9 p.m., but the people already went wild on tracks like “Make It Loud” or “Hard Driver – Wut”.

The second act was Wasted Penguinz, the euphoric and beer loving hardstyle duo from Sweden! Starting with “Wait For You”, they made a great performance, showing us, what euphoric hardstyle is about. The atmosphere during their set was amazing, delivering a bit more than we expected. Clapping and singing along to tracks like “Bitterness”, “Melancholia”, “Stay Alive” or Josh and Wesz new hit “Retrospect” gave us Goosebumps.

Now it was time for some real madness! Belgium is known for their crazy mosh pits during some fresh tekstyle beats and no one else than Mark With A K claimed the main stage, to bring us an extraordinary 30 minute live set. And guess what, the crowd went wild! We’ve never seen such an overwhelming atmosphere before. This was definitely one of our highlights at Reverze 2015!

So let’s move on with a hardstyle duo, which was responsible for last year’s Freaqshow and Bassleader anthem. We are talking about Da Tweekaz. And as always, their performance was full of energy and they enjoyed every second on stage as much as we enjoyed every second of their set on the floor! They brought us some new tunes, like the Envine remix of their track “Real Love”, and of course some nice edits.

The next act was introduced with a big bang! The clock stroke 1 a.m. and we recognized the mystic sounds of the anthem. It was time for the anthem creator himself, Brennan Heart. Still, after years in business he did not lose his attraction as an artist and we were very thrilled for his performance. He did not disappoint us! With his diverse set, starting with euphoric tracks like the X-Qlusive edit of “Imaginary” and “Follow The Light” to some raw tracks like “#Bassface” and Sub Sonik’s remix of “Outta my Way”. Many tracks were truly epic and everyone sang along all common tracks I mentioned before.

Next up was Zatox and due to the end of Brennan hearts set we were ready for some rawstyle. Of course we could have gone to Frequencerz, who played in the Lotto Arena at the same time, but we felt in the mood for Zatox. It was tense at this time and we could feel the crackle in the air! 28 Tracks in one hour, that’s huge. Although he mixed the tracks very fast, f. e. “Psycho” right after the intro, we enjoyed his set till the end. He ended with some pretty nice hardcore and everybody went furious.

Tracks like “Satana”, which is a bit overplayed at the moment, “Red Alert”, “Natural Born Raver” or “Wild Wild West” were just a few of the hits he played. And this is not enough, Dave Raven, responsible for the Vocals in “New World Order” joined MC Villain on stage and brought us some live vocals during different tracks.

After a quite boring set by Psyko Punkz we left the Sportspalace to discover Titan, who was wrecking up the Lotto Arena! What a beast on stage. The raw energy was pumping through our veins. He brought us an immense set together with MC Da Syndrome!

Back to the Sportspalace, where it was time for some oldschool. We expected a cool show and some banging oldschool sounds by Ruthless and Dark-E in the Reverze Flashback set. First the Reverze service team came up with LED sticks we know from last year, throwing them into the crowd. The whole Sportspalace started blinking and everyone waved their LED stick to the beats of Ruthless and Dark-E. Not only a musical highly, but also a great extra to the show.

After this fresh and uplifting set we went back to the Lotto Arena. E-Force claimed the stage and was ready to destroy the place. What a crazy set! You didn’t have the chance to stop dancing. High pitched screeches and brutal kicks were E-Force message to the people on the dance floor. No matter if he played his own tracks like “Hit the Floor”, “Freakz at night” or tracks by Warface like “The Meltdown” or “Chainsaw”, the people loved it. And yes, “E-Force – Seven” still makes the crowd go insane!

Recently Endymion switched over to raw style, created a new label and released their first track together with High Voltage “About To Get Raw”. So we were very thrilled for their performance. They brought us a fresh combination of screeches and hardcore similar kicks. The BPM increased till the end and we are pretty sure it was a good decision. At the same time Radical Redemption was playing an insane set at the Sportspalace!

Let’s finish up this overview with the last set by Art Of Fighters Live! They recently released their new EP “Words of War” and although we are not the biggest hardcore fans the 30 minutes live set was amazing. Now, as we covered the whole night, let’s take a look at the show.

Check out these livesets by Mark with a K, Zatox, Hard Driver or Dark E vs Ruthless! 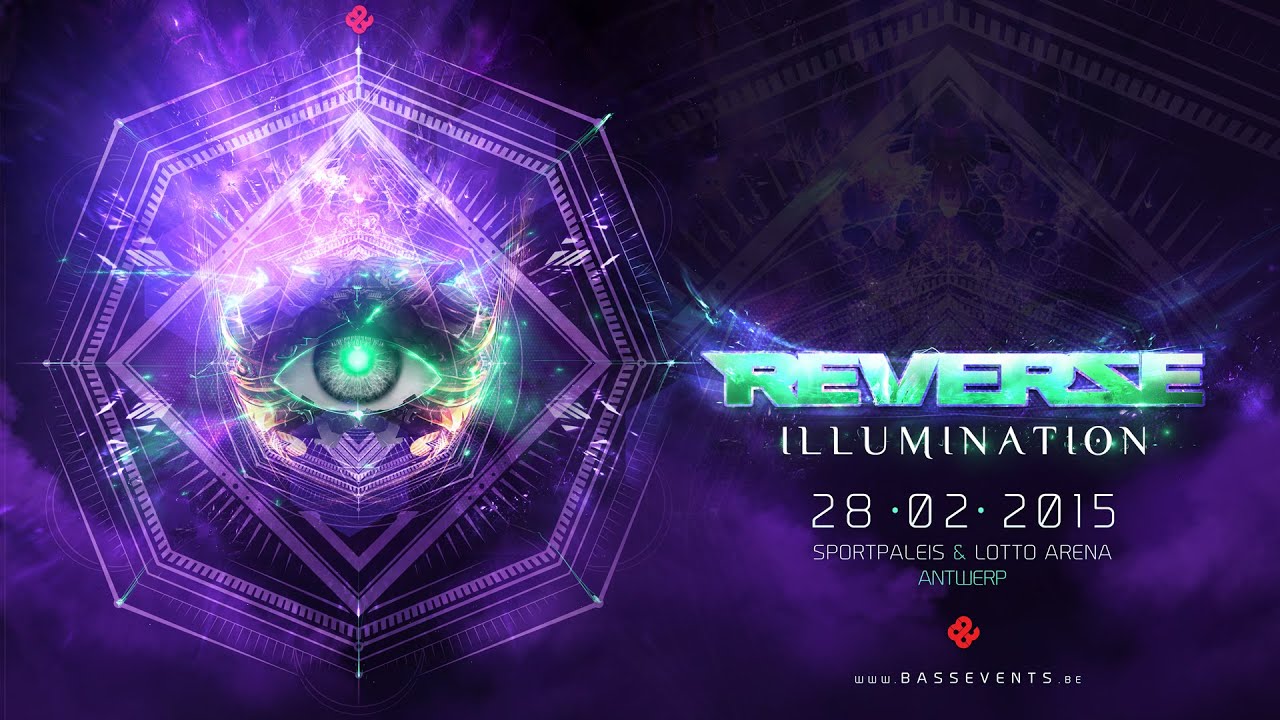 Due to the fact, that it was the 10th anniversary, we expected something special and some surprises during the night. The main stage in the Sportspalace was a big pyramid, the DJ table was placed right before it. On the sights of the pyramid they had a big LED screen as well. Hell yeah, during some sets, the pyramid opened its doors and revealed a big, round LED Screen, edged by different colored lasers. On the left and right, they had fire cannons. At the top and above the crowd, they placed squares, edged by multicolor LEDs and in the middle of each square a LED screen. In the corners they also set up CO² cannons.

The squares were movable, like the triangles at Hardbass! We don’t have words for it, you just have to take a look at the pictures, it was AMAZING! During the anthem they fired up everything they had. CO², fire and fireworks, lasers, spots spinning, perfectly timed to the beat and the melody! The show was very spectacular and pretty catchy, but we expected a bit more or a at least a more surprising element. The moving cube from last year was just hard to overtrump. But that’s just our own opinion and not seen as a negative aspect!

The Lotto Arena offered us a futuristic stage design, also covered with squares at the top at a big round LED screen in the middle. The spots were distributed around and six green lasers and CO² cannons underlined the show in the Lotto Arena. 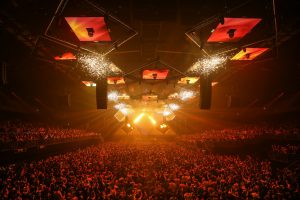 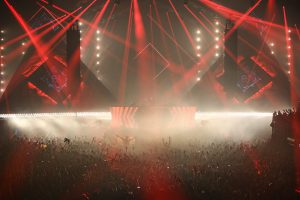 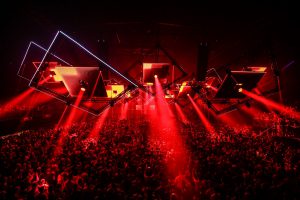 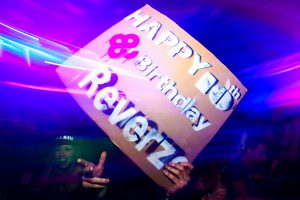 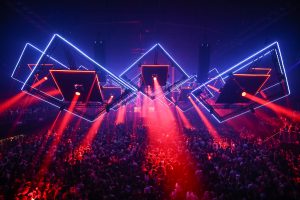 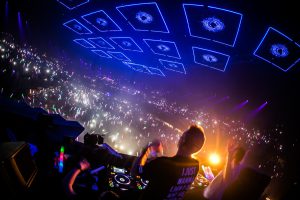 But we also noticed some minor negative aspects. We know that Bass Events is trying to bring us the perfect party and we guess for some aspects they are not responsible, but we would also like to cover the things we didn’t like.

First of all the toilets. You needed to pay 50 cents, each time you went to the toilet. We are not sure about it, although it’s only 50 cents and the fact that the toilets were pretty clean for a hardstyle event, it kind of disturbed us to pay money to go to the toilet. If you go through the comments on Partyflock or Bass Events Facebook page, we are not the only one, who felt this way. But we’ve asked Bass Events and they told us, it’s not up to them – the Sportspalace crew is responsible for the toilets, food and other facilities.

We’ve also seen a lot of people doing their “business” somewhere in the corner, which we definitely don’t want to see at an indoor event! As we found a nice place on the dance floor in the beginning, we think, the sound could have been better balanced. Way too much bass, every kick sounded the same, and the highs weren’t clear enough. If you went up to the tribunes on the left or right it was way better.

We don’t want to criticize the fact that Reverze is a 16+ event. Everyone, who is in love with hardstyle, should have the chance to visit such a great event, because this is what hardstyle is about. And if we are serious, we all wanted to visit events, although we are maybe not 16+ or 18+. But if you have such a limit like 16+, just make sure you check the ID of younger locking people. It’s not about young people going on our nerves on events, it’s more about their own safety.

So let’s sum up this review about Reverze 2015!

Bass Events has been proven again, why they are the leading hard dance event organizer in Belgium. Offering a great line-up and a spectacular show. This makes Reverze to one of the highlights of the year. Year after year. Except for a few minor negative aspects, which are based on our sensibility, we think that Reverze is definitely a must-go event! The atmosphere was great, the location is perfect and the theme is always interesting.

Don’t forget to join the Facebook event for Reverze 2016 now!