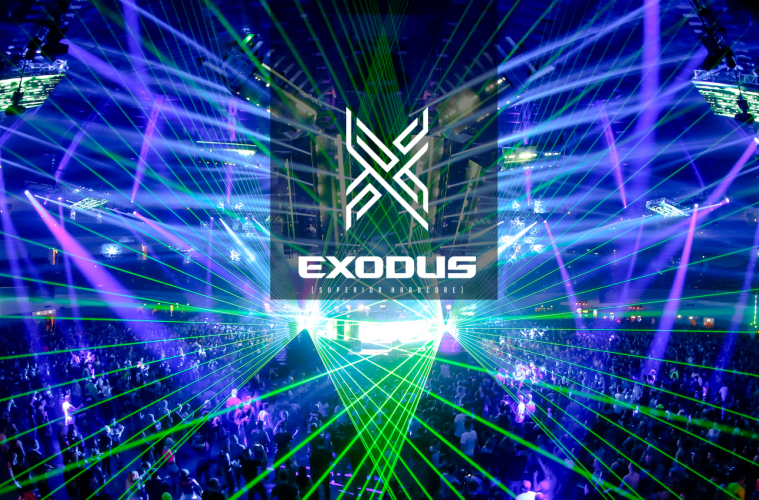 the return of exodus

The hardcore music festival „Exodus – Superior Hardcore” finally returns after a break of two years back to the epic halls of Dortmund´s Westphalenhalle.
The lineup of the third edition on February 15th looks promising:

Germany´s hardest and biggest indoor musical festival is back. After its debut in 2016 and a successful second edition in 2017 with 9.000 visitors, it’s time for this festival to return to its homebase – the Westfalenhalle. Due to several timing issues the editions of 2018 and 2019 couldn’t take place. On February 15th its time for the creators of Exodus, I-Motion ( e.g. Nature One and Mayday) and Art of Dance (Netherlands), to finally pay tribute to the scene´s demand for a third edition. Consequently the organizations have brought it back for 2020. In the socials we could see a huge positive feedback on its returning announcement.

The good thing is, the concept stays true to its origins. 7 DJ teams in a special running order will represent their interpretation of their harder style. Each team will comprise again up to four Artists who will combine their styles and tracks to an epic set to challenge the other teams. So let the contest between the genres begin – we’ll expect nothing but pure warfare. In total round about 30 international artists compose a devastating lineup.

Never Surrender, Broken Minds, Restrained – even though an interesting mixture of newcomers, but a more furious generation of Hardcore Artists, delivering their hardcore sounds of tomorrow.

Lets add some dark and industrial elements and welcome The Satan, Negative A, I:GOR and The Trasher. Therefore we strongly recommend ear plugs and good and solid shoes to dance.

A team that could certainly be also been called “Legends”. With Neophyte, Promo, Catscan and Tommyknocker we can expect a fulminant classic millennium hardcore set, can’t we?

Lets go live – Sets we all know, that are characterized by an increased intensity. And this means Angerfist – Live, Tha Playa – Live, Mad Dog – Live, D-Fence – live. So better take cover cause this is probably one of the highlights.

Survivors who are still standing will now face the ultimate high speed Hardcore with epic sounds of N-Vitral, Deadly Guns, Bulletproof and F-Noize. Compared to others the BPM will now increase, and its more likely that they’ll make your shoes burn.

Of course the current Frenchcore and Uptempo hype gets attention as well. Dr. Peacock, DRS and BillX. Since we all have seen how a Dr. Peacock closes a Syndicate – this team will unleash the ultra side of the Hardcore.

Of course, no I-Motion and Art of Dance event without a MC, who knows to turn things upside down and to keep the crowd on track – no one else than MC Tha Watcher

So lets wrap it up… one of the most epic music halls in Europe, a high dose lineup of Hardcore Artists, a MC who knows how to handle a packed crowd a stage in the center of everyones attention, and a crowd of approximately 10.000 dancing heads. What can an event offer more? Certainly a big event is approaching

Did you know? All ticket buyers can use the local public transport for free.

Own or bus travel?

Another point is that you can get your tickets directly or including a nice bus trip via Feierreisen.de or Hardtours. Consequently plan your trip and be there cause it seems it will become an epic one.