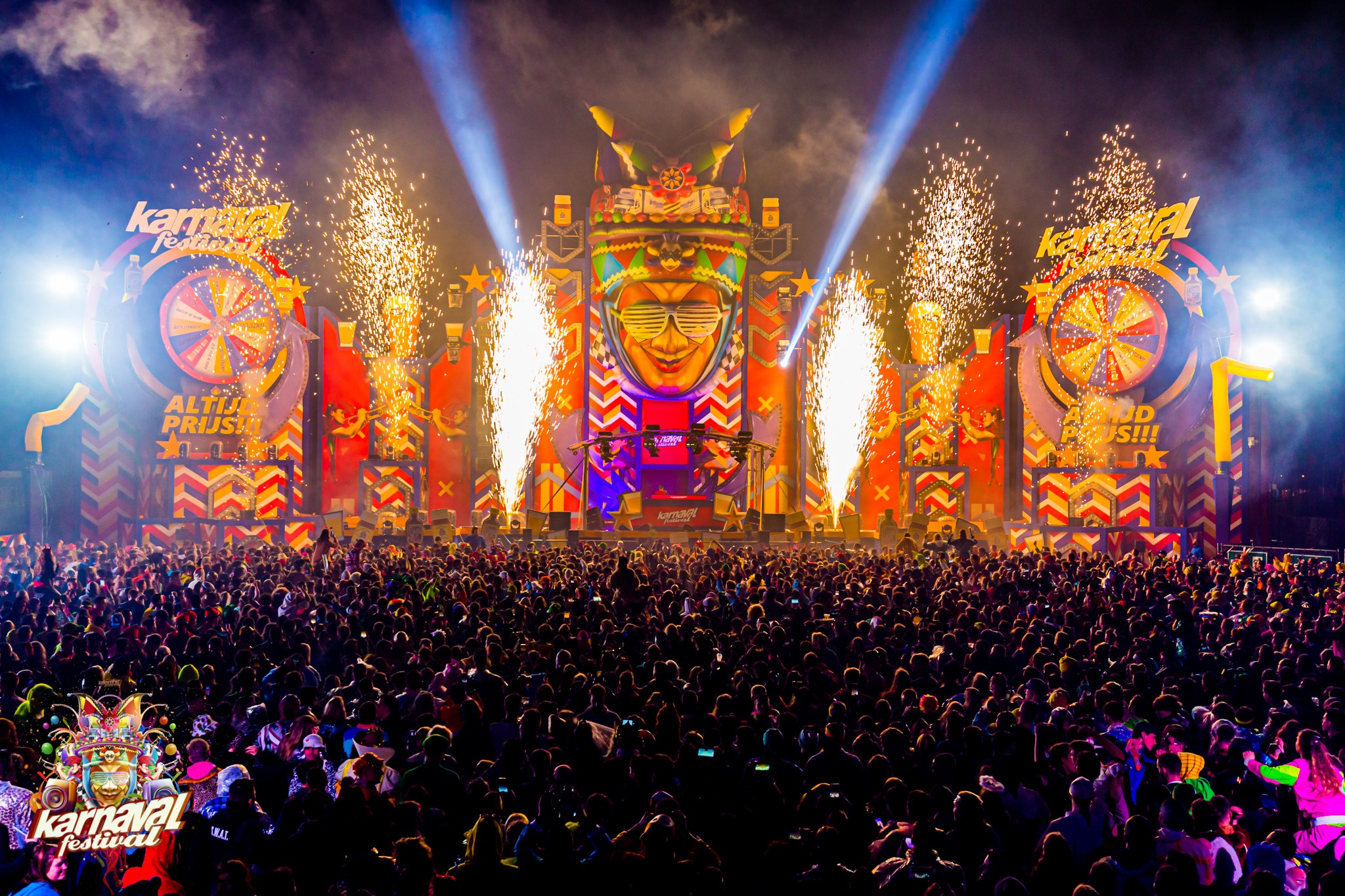 Last weekend was all about Karnaval in Holland. People dressing up in crazy costumes, drinking some beers, jumping from left to right, but most of all: having a good time! This was Karnaval 2020.

This year marked the fourth edition of Karnaval Festival, which was organised by Intents Festival. They have the experience to create a successful, cause their history of hosting festivals goes back to2004. The ticket prices were € 45,- for a weekend ticket, € 30,- for the Saturday and € 20,- for the Sunday.

Unfortunately, the weather got worse over the weekend, and the organisation had its hands full to reduce the weather’s influence. Although the organisation tried anything imaginable throughout Saturday night to continue, they sadly had to decide together with the safety authorities to cancel the Sunday.

From our point of view certainly a hard – but correct decision and it shows that for the organizers a good festival also means a safe festival. Over Saturday night, the terrain became inaccessible and the organizers reacted pretty transparent on their socials with publishing pictures next to an official statement. Even though the Sunday got canceled, what remains was still a great party on Saturday and an organizer who has shown perfect and transparent communication.

With five stages Karnaval Festival provided the ultimate Dutch karnaval atmosphere. Those were:

1. Mainstage: The only outdoor stage, which provided hardstyle with a crazy karnaval twist, which is also called ‘Karnastyle.’

4. Boombox: The smallest stage with the most intense dedicated vibes. Mostly new dj’s/talents are playing there.

With a nice weather forecast and ourselves being excited to go to a party again, we found our way to Karnaval Festival. I went by car with some friends, driving for about 75 minutes or so. With Intents providing the final information and everything that was necessary on time to go to the festival, we found our way there very easy. There were clear signs of where to go to find the parking spot. After parking my car, we had to walk about 10 minutes to the festival terrain. Scanning tickets and getting checked by security went very smoothly and quickly since the entrance was quite big. After getting a floorplan of the terrain, we went to get some festival tokens.

Those were about   € 3,- a piece, so a good price in my opinion. There were more than enough places to get tokens, and lockers were also provided in a big enough quantity. Because I didn’t need a locker, I also don’t know the price of them.

The quantity of the facilities provided by Karnaval Festival was astounding actually. In case of bad weather, there was a big tent located next to the Boombox where you could get your food and sit down to enjoy it. But also outside there were so many things to find, enough places to get food or drinks, but also merchandise, cigarettes and so on. The merchandise provided t-shirts, caps, flags and even Karnaval Outfits! They were made of a nice quality and the flags/caps were seen in the crowd plenty of times!

There was a very wide variety of food to find at the Festival terrain. To name a few, you could get yourself:

I chose to have some fries and a hamburger myself for dinner which costs 3 tokens in total, so a fair price at a festival I think. Only my fries had no salt on it, so it wasn’t exactly great of taste. I also received a cold hamburger, so it wasn’t the best food I have eaten at a festival. But this can always happen when you eat externally.

The Festival terrain itself was big enough to not be stuck at a stage for like ten minutes if you wanted to walk to another stage. This was a big relief for me because I visited three of the five available stages and with the Terrain being larger than I expected, I had no problems with finding my way within five minutes to the other stage.

The only downside (maybe due to the strong wind or the bad weather) was that the sound system actually wasn’t that great. What was actually untypical for the organisation – cause usually at their events they deliver a superior sound. I felt no bass in the music at all, and I found the sound not to be loud at all. Everybody was able to talk normally with my friends without needing to raise the volume of my voice. I didn’t need to to wear my earplugs. But like I said, I think that was cause of the strong wind.

As we arrived at the festival, we got ourselves a drink at the bar near the mainstage and attended the set provided by PRDX. Because it’s Karnaval means that also the DJ’s are dressed up! PRDX were dressed as cooks and warmed us up with tracks like ‘Different’ by Audiotricz and their bootleg of ‘Family’ by The Chainsmokers and Kygo. Straight after PRDX we enjoyed 60 minutes of craziness with Bass Chaserz. Dressed up as The Joker, he played a new version of his hit ‘Big Dick’ and his bootleg of ‘Like Thiz’ by Josh & Wesz.

He also brought out Buren Van De Brandweer for their collab ‘Helemaal Leip.’ This brought such a crazy vibe, definitely a highlight! Also, some lucky people caught a scarf from them, a really nice idea to do! During this set, it got pretty crowded very quickly, maybe because of what was coming after this set…

The third set we visited was Gunz For… Sound Rush? Maybe these guys will receive the award for the best costume! Starting their set with ‘Bolivia’ by Gunz For Hire immediately brought the vibe in the crowd. Also playing their own tracks like ‘Take It All’ and their upcoming album title track ‘Brothers’  with Michael Jo made everybody scream along with the melodies.

I had to run to the indoor Fanaticz stage to catch the next set in time. I was planning to see the so called ‘Main Assassin:’ Bloodlust. When I arrived I saw Killshot behind the decks. Then I thought: ‘Why is Killshot playing Bloodlust tracks?’ And then I saw Bloodlust dressed up as Killshot! It was like they could have been twin brothers! Playing tracks like ‘One With The Streets’ with Unresolved and ‘Imma Boss’ brought the energy level of the dedicated hardstyle fans up to the limit. He also had an unannounced surprise: He played his new solo track called ‘Samurave.’ A must-hear track if you’re a fan of raw hardstyle. Bloodlust clearly knows how to make unexpected drops work, as he already proved with his other new tracks like ‘Get Down’ with Regain and his new solo track called ‘Smash Ya Brain.’

After we checked out Killshots set, who disguised himself as Post Malone, we went on to switch stages again. This time we headed out to the Boombox to check out the sets of Cryex and Damian Ray. Since I had never been to Intents or Karnaval Festival, I had to check out this stage. People have told me multiple times that the vibe in there is insane because of the dedication and the amount of energy that flows around there. After hearing tracks like ‘Stronger’ by Malice, ‘Till We Die’ by Act Of Rage, Rise & Fly by ‘Dee-Block & S-Te-Pack’ and ‘Break It Down’ by Damian Ray, we made our way back to get some food.

D-Block & S-Te-Fan at the mainstage

After sitting down for a bit and eating our food, we made our way back to the mainstage to see  D-Block & S-Te-Fan. Dressed up as Soldiers, they provided us with tracks to keep the crowd going in the rain that was starting to fall down. Playing tracks like ‘Promised Land’ and ‘Feel It’ with D-Sturb really increased the amount of energy that the people were giving. Not a single person stood still while those two tracks got played.

As you guys may know by now, D-Block & S-Te-Fan are responsible for the Defqon.1 anthem ‘Primal Energy’ this year. When they played the track live, everybody got goosebumps. Some confetti cannons burst open when the drop came, a real highlight to witness this amazing moment.

After meeting some friends at the set of Rebelion while they played their amazing tracks ‘Bassline Junkie’ and ‘Rise From The Streets,’ we made our way back one last time to the mainstage to stay there the rest of the evening. And the best was yet to come. With five DJ’s left in three hours, we quickly stepped up our game to go all out during these sets.

The first to start the last hours of the day was Rejecta. Dressed up as a hippie he made the crowd have a taste of what to expect for the remainder of the day. Playing tracks like ‘Oldschool’ with Devin Wild and Psyko Punkz and the famous ‘Follownaise’ which is a Karnaval version of Followed, which made people walk in a train all over the festival terrain. The vibe got even more intense than it already was. Sadly, it started to rain during this set for the rest of the evening. This made everything way more exciting because was I going to take shelter for the rain and let it ruin my evening? Absolutely not! And clearly everyone thought that way.

My highlight at Karnaval Festival 2020

The next two DJ’s didn’t hold back either. B-Front and D-Sturb played the best sets in my opinion. They played their biggest hits like ‘Believe,’ ‘My Beautiful Fantasy’ with Phuture Noize, ‘Party At My Place,’ and ‘Once Again’ with E-Force. Aside from their amazing track choice, there was another anthem coming up. This time it was the honor to D-Sturb to create this year’s Rebirth Anthem. And oh boy were we in for a treat! He has put some reggae music on the track to create the summer vibe that Rebirth represents, the ultimate kickoff of the outdoor festival season! Along with an easy melody to sing along with and the hard kicks and kickrolls by D-Sturb really completes it!

The closing of Karnaval Festival

After seeing many DJs in costumes, meeting up with friends and hearing the most amazing tracks, it was time to close off our day with a bang. For the final set of the day, Zany teamed up with Mental Theo to play their anthem of Karnaval Festival together with Immer Hansi! Going crazy for one last hour before the end show with tracks like ‘Jägermeister’ by Da Tweekaz and ‘Mashup 5.0’ by Warface. Definitely the best way to close the day with those to behind the decks!

The endshow contained a beautiful light/lasershow combined by fireworks. Even though it was raining it was beautiful to see. The endshow featured ‘Naar De Klote’ by Mental Theo, Zany & PartyfrieX and ‘Nothing Like The Oldschool’ by D-Sturb & Sefa.

Even though the weather wasn’t the best, I still had a great day and I felt sad that the Sunday got canceled. Overall I would love to visit this amazing event again. The preregister for the 2021 edition is already open, and I definitely recommend to go to this amazing event!