Qlimax. Once a year Hardstyle fans from all over the world gather in Arnhem to celebrate and witness a spectacle unmatched in atmosphere, musical and visual standards. The golden child of Q-dance’s event roster, Qlimax has been the absolute highlight of the Hardstyle indoor event season each year. And also this year, we were up for quite a ride!

Arriving in Arnhem around 22:15. At that moment the queue for the shuttle busses was suspiciously small. Were there no people at the Gelredome or were the shuttles just coming more often? And thankfully the second was the case! Thumbs up for solving that Q-Dance! Shuttle tickets were still 5€, which is pretty much what you pay for any shuttle bus at a Hardstyle party. Finally at the Gelredome! We saw a Merch booth outside this time, which was great for the collectors! 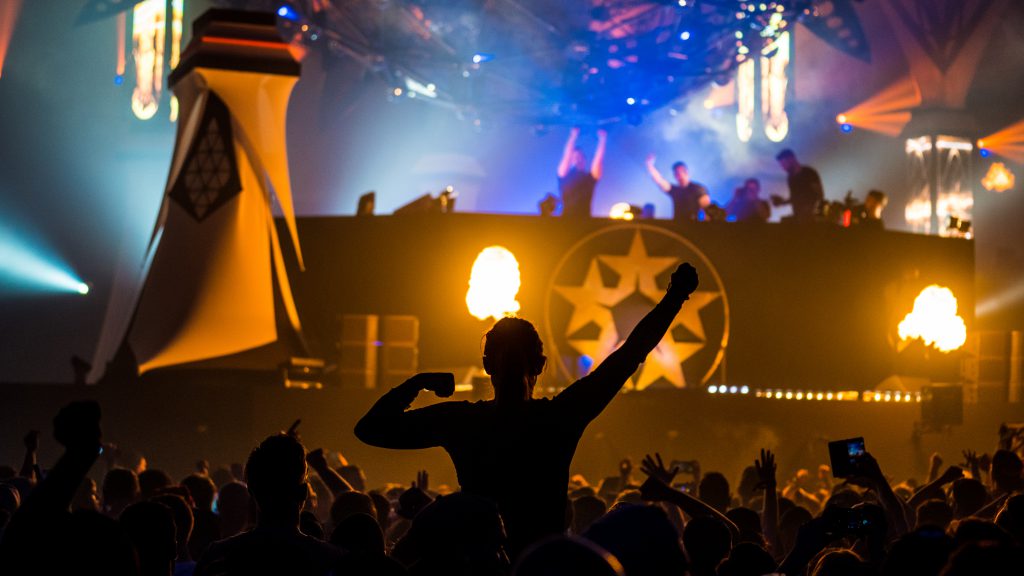 We made it in quite quickly, but had to line up for a new “Wallet” card first, as we couldn’t find our old ones from last year. The line was big, but waiting times were acceptable. What was not acceptable was that some friends of our had trouble with being charged double on their Wallet Cards every now and then – this was a bit disappointing. Finally fully equipped to party, we first decided to watch the rest of T’N’T and the opening show from the top-back area of the Gelredome. T’N’T played a perfect warm-up set, filled with beloved classics, new tracks and everything a Hardstyle lover could wish for. The pattern of “picking the Italian(s) to warm up” seems to be a formula that has worked out well – and it worked out very well this edition.
It was finally time to get excited! “This is – …Qlimax!” The curtain fell and the stage was presented to the visitors. It was indeed a “Temple Of Light”, with a huge Sphere, most likely symbolizing the Sun and the Moon, and several pillars at the sides. It reminded us very much of “Sensation White” a bit. A few LED-panels at the sides would have given the stage an additional “kick” though, as it looked very visually compressed to the middle or just plain narrow at some points. A moving ring around the “Temple Sphere” and moving elements all over the crowd completed the stage. A massive array of Moving Heads and (of course!!) lasers danced around in full force as the first DJ’s of the night stepped onto the stage. 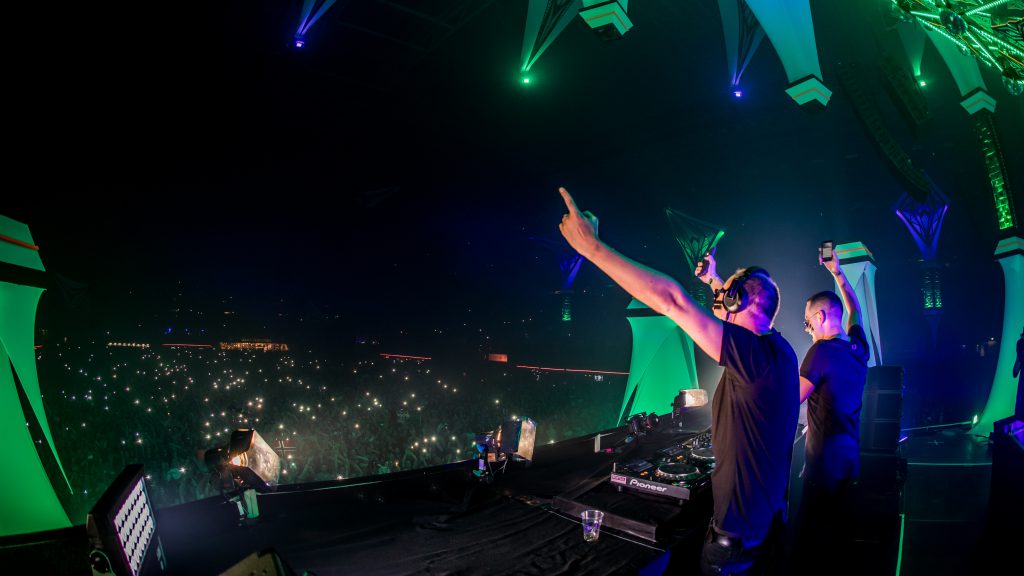 D-Block & S-te-Fan delivered an absolutely massive set, though we would have thought that Da Tweekaz might be opening the “official part” of Qlimax. One of the highlights of the set was “Angels and Demons”, but no not really – the moment “Shiverz” came on, we decided to take that back. The crowd sang along to the track so loudly that you could hear the echo in the Gelredome for at least a second afterwards – what a goosebump moment! DBSTF closed their set really brutally for their standards, which kind of made us a bit worried about the crowd response during Da Tweekaz.

But Wildstylez was next. Of course. Anthem show at twelve, right? And man, what an absolutely incredible set. We’ve had little flashbacks to Project One last year every now and then and it was absolutely satisfying to finally see Wildstylez at the place he deserved since such a long time: the place as an anthem creator of Qlimax. Next to his own tracks, a LOT of Project One stuff, a new collaboration with Sickdellz and absolute bangers like his “Great Spirit” remix. The set was nothing less but everything that Qlimax is about! The set ended with the anthem show and was just very satisfying to listen, sing and dance along to. 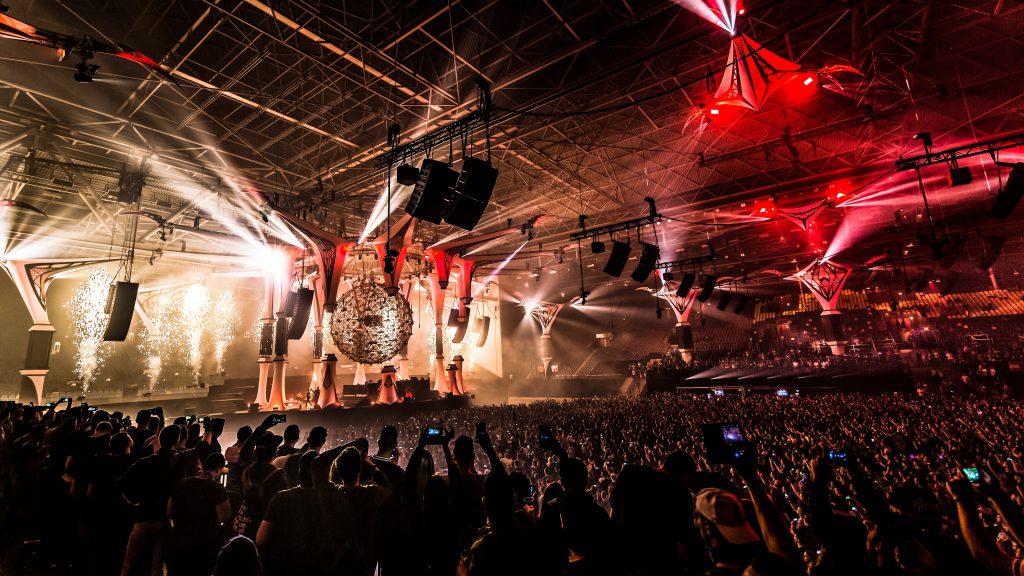 But now: Da Tweekaz! – Opening of with a “Bring Me To Life” bootleg. The Norwegian Fun Act surprised us at first, but fell back into old patterns. If that was good or bad is left up to our readers, but we definitely think they would have fitted before DBSTF and not after them and Wildstylez. The set itself was absolutely brilliant and definitely the best Da Tweekaz set we’ve heard. It was something quite different from them, a lot darker at a lot of points, but Tweeka classics like “Frozen” were not missed. Oh and about “Jägermeister”: Having several Germans and an Austrian on the team we absolutely appreciate that Apres Ski Hardstyle is now a thing! ( 😉 )

Next up was a set we went into with zero expectations, but were very positively surprised about: Noisecontrollers and Atmozfears. We’ve seen both acts at Qlimax several times now and, to be quite fair, expected a good but not “mind-blowingly good” set. Yeah well, what can we say, we were up for a damn treat! The two technical masterminds combined their styles perfectly and the rougher side of their styles created a perfect transition to the more darker, harder part of the night. Definitely, and quite surprisingly one of our favourite sets of the night! 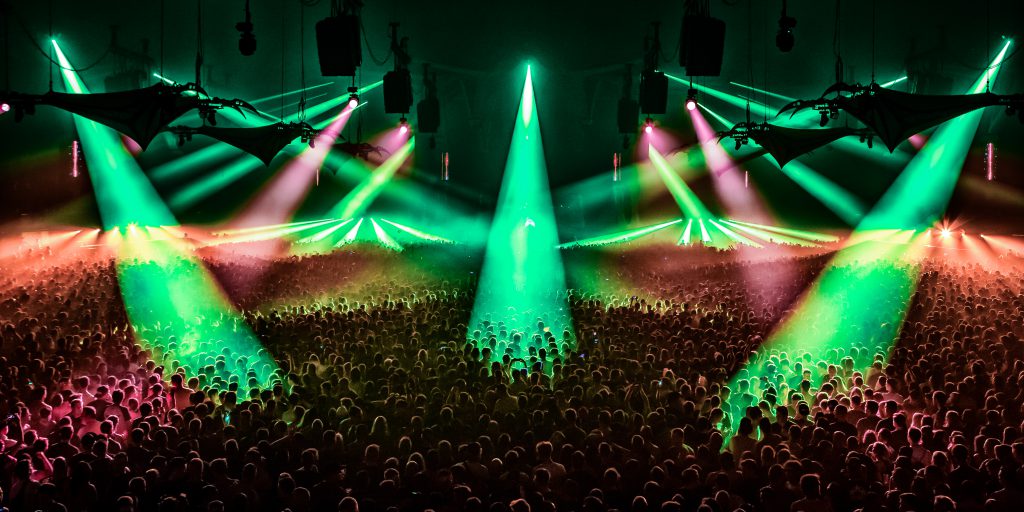 Frequequencerz set’ was quite amazing as well, as their general “hard but not too hard” Hardstyle with a dark vibe fit the set and setting of Qlimax absolutely. Next to “Wolfpack” and other beloved Frequencerz classics we might have heard a new edit and track here and there! The surprise act was Phuture Noize. This was very well deserved and once again fit the vibe of Qlimax absolutely perfectly. The youngster absolutely tore the place apart and we couldn’t have asked for a better surprise act for the night!

Sub Zero Project were also nothing less but mind-blowing. While the sound was a bit too silent (especially at the low-end) at the beginning of the night, we could definitely hear the kicks pounding veeeeery hard during their set. An absolutely great Raw Hardstyle experience that did Qlimax absolute justice – these guys 100% knew what they were doing! A little bit disappointing was Gunz For Hire, not because they didn’t play enough new stuff, but more so because we missed some classics. The set was great, don’t get us twisted, but for a Qlimax appearance we expected more – maybe too much? 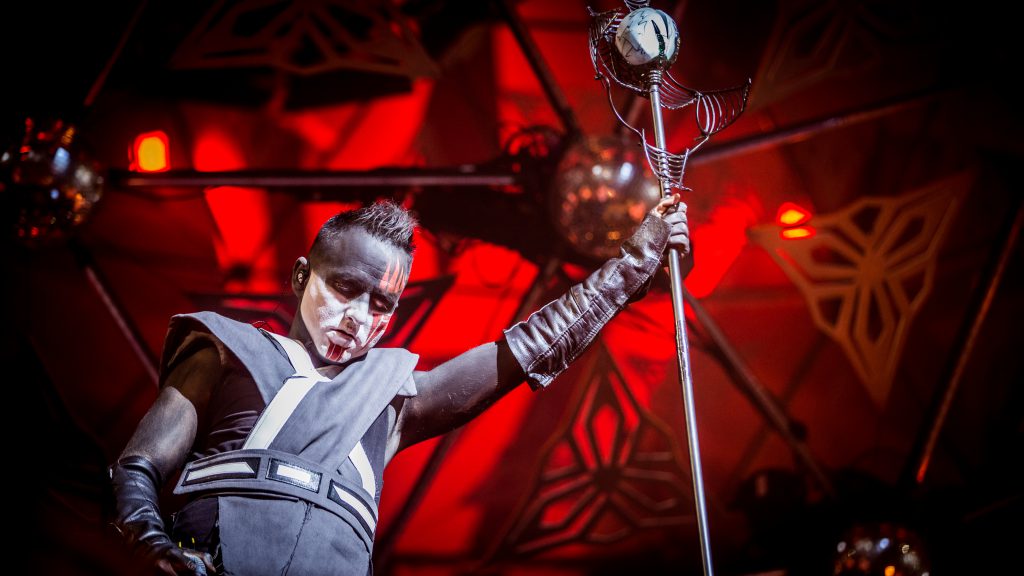 With N-Vitral taking the stage, it was time for the last act of the night. And what the fuck – this was almost as good as Angerfist last year! Comparing N-Vitral to Angerfist is a little unfair, but what N-Virtal pulled off, was absolutely insane, even in comparison with last year’s closing. This closing was nothing less but absolutely in-fucking-sane, and even though we’re not so much into the “Hardest Of Hardcore”, N-Virtal presented each track in great context and made the set quite enjoyable.

The last “Hakk” was done, we yelled along to the notorious “Wow, wow – This was was a Q-Dance event!” and “Don’t Worry, Be Happy” slowly played in the background, as we tried to understand what the fuck just happened this night. Q-Dance once again pulled off a show that has absolutely no comparison within the Electronic Dance indoor event market. And once again it has been one for the books! Everything went absolutely smoothly this year on our side and we were positively surprised here and there.