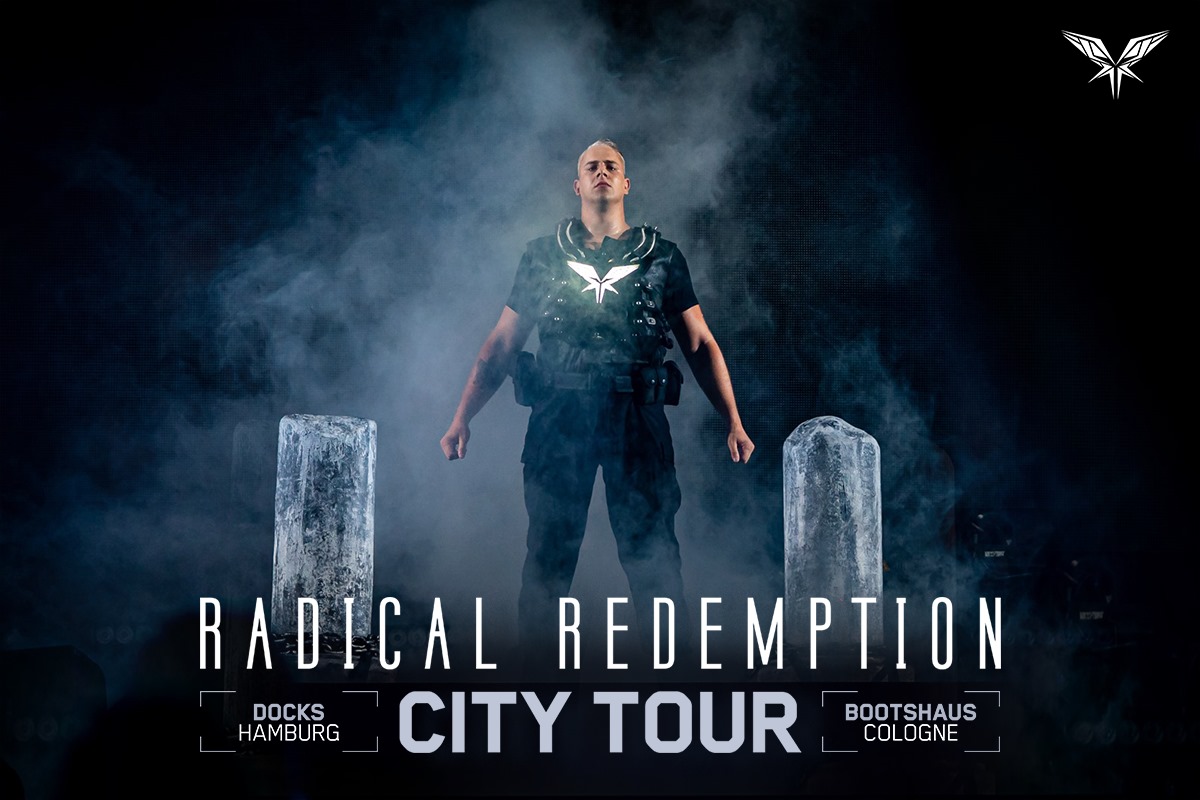 On its road trip, Radical Redemption made a stop in Cologne to throw a party at the legendary Bootshaus. According to the DJ Mag – this club belongs to the worlds 8 best venues. So this time, the venue was appointed to feel the sounds of Radical Redemption

We arrived before 23:00 and directly saw that a long queue was already growing in front of the doors. Main reason was, that like in Hamburg – there was again a special fan meeting scheduled with Radical Redemption now in Cologne. This started already at 21:00. Consequently there was plenty of time to have a drink, to chat with the legend and to prepare for the night. The Radical bus – which was standing next to the meet & greet – opened its doors to play some Radical tracks which already contributed to a good Radical atmosphere.

After approximately one hour, the meeting was over and Radical and his crew returned to the venue, for the last preparations including light- and sound checks.

At exactly 23:00 the doors were opened and the crowd went inside. A well organized and friendly security crew and ticket scanners ensured a smooth and fast check in. Well done.

Merch trophy hunters got directly served behind the check in, with a small merchandise stall. The stall comprises either Radical Redemption but also Musical Madness merchandise. The offer was solid thus products like fans, snapbacks or t-shirts were available for a fair price.

Attentive visitors directly noticed that tonight not the DJ booth in the corner but a special stage with lights would be the central point of the night. Luckily the Bootshaus’s own sound system was used to fill the venue with the sound. Thus the Function One made fantastic sound and delivered a superior sound quality which all Boothaus fans are used to.

Broken Element was the act who kicked of the Radical night. They played a solid and interesting mixture of classic and modern rawstyle sounds.

Already 30 minutes after midnight, the first highlight appeared on stage, E-Force. All those who saw him as warm-up, got clearly taught a lecture. An impressive set of 75 minutes and his latest tracks like “Necromancer” or “The Stars” made a clear statement, that this guy is still a master of the rawstyle sounds and this for good reason.

The clock hit the 01:45 when it was time for Radical to fill the primetime with his sounds. Radical Redemption – got introduced by an epic intro and within seconds he took over the complete Bootshaus – and people went nuts. Full 90 minutes of Radical Redemption were ahead of us. He started his set with a mix comprising tracks like “Cross of Blood” and the Qlimax intro. Now the complete are was comparable to a madhouse. Flags, hands just everything which was liftable was hold up. Radical fostered the already great atmosphere with classical tunes like “Testarossa”, “20.000 volts” and edits like “Brutal 6.0”.

But this night offered more – surprisingly he also played unreleased tracks like “Beat you mother” which is a collaboration with Lil Texas and Yellow claw. This definitely made this set to a very special and unique one.  But his is Radical Redemption – relentless, hard and powerful – just unlike others. And the reason why his fanbase has such a big size.

Time for Act of Rage

This madness continued until 03:15, but the next act didn’t even consider to hit the break. So it was time for Act of Rage and he directly surprised the crowed with the presentation of this years Qapital anthem. Taking into account, that the announcement for the anthem just took place couple of hours ago on the socials – we have to admit, that is was really a big surprise. So the Bootshaus was part of the world premiere. The rest of his performance included mostly tracks of his album “Outrageous” and the collaboration with D-Sturb “Let the Games Begin”.

For the closing Sonic Illusion took over and delivered a solid set of 90 minutes, to entertain even the last die hards on the dancefloor.

This was a night clearly under the sign of Radical Redemption – maybe the biggest name of the rawstyle scene. The night fulfilled all expectations and partially even exceeded them. Like the week before in Hamburg, it was again absolutely visible that Joey aka Radical Redemption loves this music and he loves his fans. Over his whole set there was kinda connection between him and his fans noticeable.

We as Hardstyle Mag had a fantastic evening and thank Musical Madness and Radical Redemption for a perfect night in cologne. Therefore we are looking forward for the next upcoming Radical nights, who won’t fall behind the first two nights.

Read more about the Radical night in Hamburg