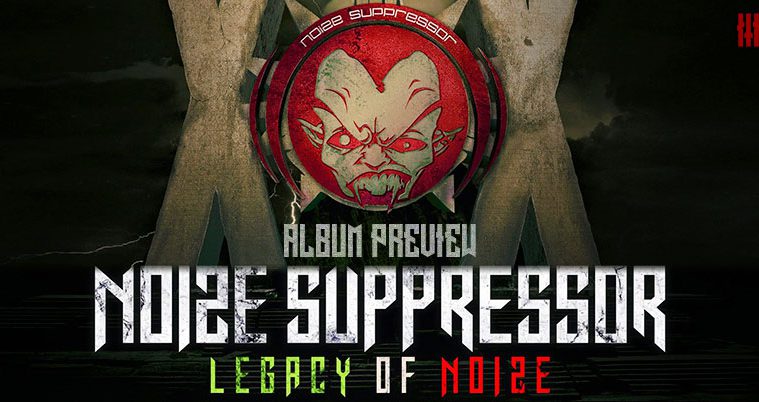 At Dominator we did witness a lot of amazing sets. Amongst them was a dazzling 30-minute ride by Noize Suppressor feat. MC Multiplex. This set was all about the album release, Legacy of Noize. An album about twenty years of Noize Suppressor. An album that consists out of 3 CDs. With many new materials but also a collection of the best Noize Suppressor productions. Let’s have a look at this album!

When we open the DVD format, we spot CD 1 on our left hand and a drawing at our right hand, which is the inside of the temple, very cool I must say! When we flip over the right side we spot a booklet in the middle of the cover, and the two other CDs at our right hand. The CD’s have the same design, just another number. It’s a snapshot of the logo, with the surroundings of the construction of the temple. The booklet has the same design as the cover. The backside of the booklet has the same design as the backside of the album cover. It’s the backside of the temple which is build up on a big mountain. Of course, the whole theme of this album suits the design. It’s the temple of Noize Suppressor, it is his legacy, I love the concept! In the folder, we do spot many photographs from the beginning till ‘now’.

Let’s talk about music now! I really love all the tracks on the album but I just want to make a selection of our favourite tracks of the album. Let’s check some tracks at the first CD!

‘MOVE AS A UNITY WE ARE NOT THE ENEMY’ – This is what this song is all about. Hardcore united as one. I have to say the voice of Multiplex is amazing. It is very rough, or ruff as Multiplex will say ;). The energy in this track is brilliant, it’s a typical Noize Suppressor song, but it also refreshing. Even though there are a few breaks in this track, the tempo in this track is immense. A good opening track of the album, which sounds promising, curious what will follow!

03 Meet My AK with Hard Driver

When I did check the tracklist, this was the track that surprised me very much. Hard Driver, a hardstyle producer vs. Noize Suppressor. How?! I was really curious. The track is made around 180 BPM. So it is no switch between the two styles, BPM wise. It is melted together at a higher BPM. Speaking about melting. It is truly a masterful track. Hard Driver is also known for his great mastering and great productions. This could hardly go wrong! Still, I’m surprised that both styles of producers can be heard on this track, but it still sounds as one ‘team’. The first drop sounds a bit more like Hard Driver, the second as a real Noize Suppressor drop with Hard Driver screech sounds on top. The third drop is a real fusion of both styles in one drop. Great! This really is a track that you have to listen to. A track full of energy!

This track reminds me of Man on a Mission, the tempo, the drive, the brutality, the sound effects, we all like it! It’s a non-stop drive which makes you pound at the beat the whole time. Again the voice of Multiplex is doing a great job over here. The track is balanced, pure Noize Suppressor style, the fans will like this one! In the end, you think the track finally came to rest but don’t be surprised to witness another slamming drop!

06 Nobody Stop This Sound

Nobody Stop This Sound is a track that is totally new and refreshing. It’s a track with heavy kicks, a small piano intro, and a vocal that reminds me of Da Tweekaz somehow. At 2:33 a f#cking heavy drop pounds through your speakers, slamming regardless! Open your mind for this one, it’s very experimental in my opinion!

07 Back With The Hard Street Shit

At number 7 we find another collaboration. This time, it is a collaboration with Angerfist. In the intro we spot a number of piano chords by Angerfist, it sounds promising. Then a typical Noize Suppressor drop follows. After the drop, it’s time for a break with Angerfist ‘choir’ sounds in the background. This evolves itself into an Angerfist piano melody. The piano, however, is on the pitch that is often used by Noize Suppressor, awesome! A true fusion of giants. Like the track with Hard Driver, This is another banger!

Oh yes. Another collaboration. But again, a freaking good one! This time, it is Tha Playah who joins Noize Suppressor in the studio assisted by the vocals by MC Nolz. The energy in this track is enormous, I did already hear this track live like 3 or 4 times, and it’s amazing. The sounds of Tha Playah in the breaks and the Noize Suppressor sound at the drops really seem to match perfectly! The vocals by Nolz aren’t that special, sadly. Repeating Ground Slayer, Noize, Playah a bit to often in this track perhaps. Still, I like the track producing wise. It has a good vibe, change of tempos, uplifting and powerfull, mastered in perfection like Tha Playah is known for.

The final track on the first CD is another collaboration. Unexist and Noize Suppressor join forces, Feat the brilliant voice of Satronica. Unexist, known for his heavy kicks and brutal rhythmic structures, Noize Suppressor for his amazing powerful and tremendous melodies. Unexist does work together with Satronica often so they know how to deliver. The track is filled with powerful kicks, heavy snares and hi-hats and more. Oh yes! It’s a f#cking WAR ZONE!

The first CD consists out of 15 tracks. Amongst them are 7 collabs, one remix, and a few solo tracks. There is no single track that we didn’t like. How often do we see that? The album provides a lot of demolishing tracks. And we recommend you to check them all. You can still hear the sound of Noize Suppressor in all the tracks which are a good thing. He didn’t switch, he just evolved!

The other two CD’s are a collection of the productions by Noize Suppressor. You will spot tracks like Fingers in the air, Man on a Mission, Party Animal, Bassdrum Bitch, Circus of Hell, Pole Position, Party Motherfuckers, Moving Quickly, Fingerz, Top A Top, Loose my Mind, Noise Suppressa, Overdrive and Bike’s Drum. Yes, it contains all. From his first release until today A great collection, a must have for every Hardcore head or Noize Suppressor fan!

Go to the Masters of Hardcore store now: http://store.mastersofhardcore.com/noize-suppressor-legacy-of-noize.html